ADHD Diagnosis: What can I do to overcome feelings of guilt and shame?

In episode 314, I received a question from a listener who is struggling to come to terms with their ADHD diagnosis, experiencing overwhelming feelings of guilt and shame attached to this. In this post, I talk about how they are not alone in feeling this way and offer my thoughts on how to address these thoughts and feelings.

Hi Duff! 🙂 First of all – a huge thank you. Your podcast was and continues to be a huge source of comfort in the 1,5 years since my ADHD diagnosis, that started my mental health journey for good. I have listened to every single episode since. Question: ADHD symptoms on their own are only a part of the problem – the guilt and shame attached to them are still overwhelming. What can I do to overcome that? Background: I am female and was only diagnosed at 25 years old, despite meeting all of the criteria for ADHD combined. I realised that my self esteem is built around thinking that every symptom comes from my awful personality, laziness and uselessness. Now, with the help of my awesome therapist, I am rebuilding my self image from scratch, but I still struggle with anxiety. Forgetting things or stumbling on my words creates this visceral wave of fear and guilt I just can’t seem to shake. I keep struggling with bouts of depression since childhood. Any thoughts and advice on managing the ADHD related shame? Thank you for your time. I appreciate everything you do for the community!

Wow! Every episode. Amazing and thank you!

What you are describing is SO common. Secondary mental health issues like depression and self-esteem difficulties are majorly common in people with ADHD. I’m so glad that you are working with a therapist for this reason. It’s actually something that a lot of people don’t think about or realize should be part of ADHD treatment. They assume that therapy for ADHD would just be all about strategies, tools, skills building etc. for the attention component. That can definitely be part of it, but what you are describing is going to be right on the money for people that have ADHD or people that work with people that have ADHD. You sound very insightful and aware, which is going to definitely help you out here.

For one, I would suggest getting involved in ADHD communities online. There are a lot of great websites, forums, etc. out there for people with ADHD. They share resources, information, support, and even perspectives like your own. This can be really normalizing and validating, since as I mentioned, you are totally not alone in your experience. It’s super common for women with ADHD to not be identified as early as men. It’s very similar to the situation with autism, where the symptoms present differently depending on what sort of social role you fill. We tend to look for obvious signs of ADHD, so the more subtle and internalized symptoms can fly under the radar, especially if you are smart or able to find your way through school effectively.

Call out your thoughts

Another thing that can be helpful in this part of your journey would be to start labeling and calling out these negative thought patterns of yours. Basically, trying to externalize them to recognize that they are a thought you are having, but not necessarily the truth about you as a person. For example, if you find that you are thinking that someone thinks you are stupid, try to catch yourself and instead of calling yourself stupid, say to yourself, “I am projecting my fears of being lazy onto other people again.” This can be done in your head, out loud, or even later in the day using your journal. You can also go further and investigate the evidence. Has anyone in the present told you that you have done something dumb or embarrassing? Are there any concrete pieces of information that tell you that you should be concerned, or does this all require a lot of interpretation and extrapolation? Remember that when you assume someone feels a certain way about you, you are not giving them the benefit of the doubt. You are essentially doing to them what you are afraid they are doing to you, which is not giving you a chance and just making negative assumptions about them. Of course, this is all happening in your head, so you don’t need to feel guilty about it. You aren’t hurting their feelings by making these assumptions, just your own. But if can definitely impact the way that you choose to behave and interact with people.

I also encourage you to do the opposite and start to pay more attention and document the good things about yourself. The times when you’ve made someone laugh, the tasks that you were able to accomplish, even though they were difficult, the friendships and relationships that you’ve been able to build, the ways in which you have not allowed yourself to be limited. Obviously, the reasons that you started therapy are reasons that are painful to you. But how cool is it that you are handling this? You are doing more personal work than many people ever have the will to do. I think that’s super admirable and makes you a more interesting person. There is also a lot of power in owning your diagnosis. This is something that you are taking the power back from. You are trying to not let it limit you. That’s super cool.

I’m sure this is also something that gives you some quirks. That’s not always a bad thing. I think that it would be extremely boring if everyone interacted the same way. So, calling the ADHD out sometimes when it’s rearing its head in a social situation can be helpful. When you feel the visceral wave of fear and guilt when you stumble on your words or forget something, you might try being a little humorous about it. You could make a joke like, “phew, ADHD brain is on overdrive today. Thanks for being my friend haha, I drive myself crazy.” Whatever is appropriate for your personality and the relationship. You don’t need to justify your existence. You aren’t doing anything wrong, but you are allowed to be casual about it. It’s a part of who you are. It’s something that gets in the way of life sometimes. It’s also something that’s probably pretty funny at times.

The thing that we want to watch out for is avoiding situations because you assume that you are going to make a fool of yourself. It can be a bit of a self-fulfilling prophesy where you assume you have no friends because of your ADHD, but in reality, you don’t have friends because you won’t let yourself socialize for fear that people are going to think you are strange or annoying. The more you engage and realize that this isn’t a limitation or something that people are judging you for as harshly as you are judging yourself, the easier it will become.

The last thing I will say is to just have some patience. You’re dismantling a lot of deep beliefs about yourself. That can take some time. You are on absolutely the right track with therapy, so just keep doing the work and this will become easier and easier.

You can listen to this on Episode 314 of the podcast! 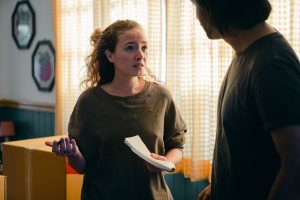 How Can I Support My Autistic Partner’s Mental Health Without Harming My Own?
Hello, friends. In episode 314, I received a question from struggling to support their autistic partner through their past trauma,…