How do you fight off feelings of being a bad person?

In episode 274, I received a question from an individual who struggles with feelings of being a bad person. In this post, I look more deeply into the fundamentals behind this question, looking at why these thoughts may occur and what you can do to tackle them.

How do you fight off feelings of being a bad person? Lately I’ve been struggling with feeling like a bad friend, daughter, student, employee, etc. etc. I tend to forget to respond to texts and go periods of time without checking in on people (ex: me and my dad go weeks without talking sometimes, he lives far away and we both don’t text well and I don’t like phone calls). I also just feel like I can be selfish sometimes (ex: a guy I dated for a short while that I ended things with wants to be friends and I didn’t want to say no – I don’t have anything against him – but I get annoyed when talking with him so much so I don’t engage that much and then just imagine that doesn’t feel great for him). I feel like people think I’m a bad person because I keep doing things that are kind of shitty (ex: housesitting for a family member and inviting people over – nothing bad happened, just feels disrespectful to not ask and they have a ring doorbell so they know people were over). I don’t know if I’m overemphasizing these things in my head because when I try to think through it, there’s nothing huge that I’ve done that was bad but just a bunch of little inconsiderate things that add up. I just feel like shit about all of this. Sorry for the long-ass message, thank you for everything you do.

Thank you for your question. This isn’t a comparison game, but by your metrics, if you are a bad person, I am literally human trash. I go mooonths between checking in with my dad. I forget to respond to people constantly.

You know, I said it’s not a comparison game, but it can be a useful exercise. Would you assume that I am a bad person if I go a long time without checking in with my parents or decide to prioritize my own time and mental health over going out on limbs for others? I can’t answer for you, but I assume you wouldn’t judge me as harshly as you’d judge yourself. You can also think about the other person. Presumably, some of the responsibility for following up etc is on the other person as well. Do you hate them for not doing it sometimes?

You asked the question of whether you are overthinking things. I think the answer is an unequivocal f**k yes you are. There is absolutely nothing wrong with the fact that you don’t want to engage much with someone that annoys you. If you were leading him on and saying that you will hang out soon or that you are better friends than you actually are, that would be a different story, but it doesn’t sound like that. It sounds like you are fine staying non-close friends and that you don’t want to be a jerk about it, but you don’t feel the need to actually spend much time together because it’s not pleasant for you.There is NOTHING wrong with that.

One thing that I noticed in what you said about this person, in particular, is that you “just imagine that doesn’t feel great for him.” You don’t know that. This is a thinking trap called “mindreading”. If you want to learn more about common thinking traps, listen to episode 211 of the show or join my mailing list. But essentially, mind reading is when you assume you know what other people are thinking or feeling. This often comes up when you are interpreting the actions of other people. So like if you were right about this guy you dated feeling terrible about you not engaging with him, he might be mind reading by assuming he knows it’s because you don’t like him. In this specific case that would be mostly accurate, but he doesn’t actually know that. It’s just a guess. Guesses get you in trouble because they help you confirm your biased perspective on yourself that is probably already negative. They also drive you to act differently. So you start behaving as if your assumption is fact, which doesn’t always lead to the best sort of behavior or it can simply lead to bad feelings like guilt in this case.

A quick little two-column chart could be helpful in situations like this where you write evidence for and against the assumption that he feels bad about the situation. You may find that there aren’t a lot of pieces of evidence beyond “it just feels that way” That’s another thinking trap – emotional reasoning. You assume that because you feel a certain way, it is true. So you feel guilty, therefore you assume there is a good reason for you to feel guilty and interpret the situation as such. I go into way more detail about this and how to recognize and break down these patterns in my books and online course, so that might be something you could benefit from. I hear more emotional reasoning in this “I feel like people think I’m a bad person”. Has anyone that you are concerned about actually told you this? Is this a pure assumption?

Mental filtering is probably going on as well. With mental filtering, we just notice the negative things that support the way we already feel about ourselves. Basically a confirmation bias. Instead of weighing things equally and giving the same weight to the evidence that doesn’t support your negative internal feelings or even the neutral things, you just drive yourself deeper and deeper while convincing yourself that it’s justified or logical. Nothing I’m hearing here is incredibly shitty and I get the feeling that you are truly quite responsible, but you are just excessively hard on yourself.

The other thing is that everyone is allowed to do shitty things from time to time and that does not make you a shitty person. Think about all of the minor inconsiderate things that other people do. Imagine that other people in your life are as hard on themselves as you are. What are all the things you could pick out if it was you in the situation instead of them? This will help to illustrate all the ways that you don’t overinterpret other people’s minor slip-ups. Unless you do and you are just hard on everyone, but I don’t think that is the case here. That doesn’t sound like your tendency as much.

Another thing you can do is start asking people for feedback. Instead of just assuming the worst and making yourself feel terrible, you can actually find an answer to your unanswered questions. So for your dad, you could ask him next time you talk whether he feels bad about the fact that you don’t check in so much these days? I really don’t think that you owe that person you dated anything – that’s such a non-problem that you don’t need to solicit feedback. But you could ask someone that you trust to give it to you straight like a best friend or a cousin that you are close to whether you come off as a bad or inconsiderate person. Even if they don’t think you are, you can ask if there are things that other people might interpret that way.

This is a situation where I won’t suggest therapy for once. I mean you could definitely do therapy and may benefit from it, but I also think there is a ton of work to be done here on your own. Pull in some basic resources about cognitive behavioral therapy whether they are mine or someone else’s and start holding yourself a little more accountable for challenging your thoughts and assumptions. This should get you a long way.

You can listen to this on Episode 274 of the podcast!

How To Treat A Phobia Of Medication

Mental Health At Work: Will I Lose My Job? 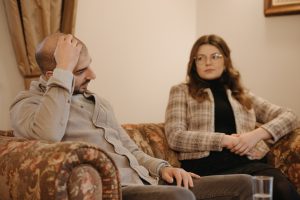 I Can’t Talk About My Feelings: Is Therapy Still An Option?
If you find it hard to talk about your feelings then you might feel therapy would be a pointless exercise.…