How Can I Stop Overthinking?

Being stuck in your thoughts can become extremely tiring. In episode 305, I received a question from an individual who finds themselves constantly overthinking which leads to mental exhaustion. In this post, I discuss overthinking in more detail and offer some ways you can keep on top of your thoughts.

Thank you for providing a platform to ask questions for us.

I find myself constantly overthinking, whether it’s about something in the past, something I wish would happen (or expect it to) and it doesn’t and ends up leading me into disappointment and anger frenzy or finally trying to find hidden meanings in things like a simple text from someone I like. I was wondering what would be an exercise for me to use and try to understand what I’m going through and relieve myself from a bit of that mental exhaustion

Thanks for the good question. This is a very common issue, especially among people that may have significant anxiety. You are essentially saying that it is hard for you to focus on the present moment because your mind is preoccupied by regrets and frustrations from the past as well as worries or wishes for the future. I think that everyone battles with this to some extent, but for you, it sounds pretty pervasive. You find yourself dwelling on things so much that you start to invent your own meanings, which can obviously get you into some trouble when that starts impacting the way that you act. For example, let’s say that you are texting someone that you are interested in, and you ask if they want to meet you somewhere over the weekend. You are excited, but sort of playing it cool like, “I’m free on Saturday. Do you want to meet up and see a movie?” To which they reply, “Sure that’s fine.”

Now understandably, you might have a little bit of an immediate reaction to that. It’s not the most enthusiastic response. For someone that is thinking about things the way that you are, you might take that even farther, though and start to overinterpret. Maybe they don’t really want to? Did I say something wrong? Am I being too forward? Is that a boring thing to do?

These thoughts are normal immediate reactions and you don’t have a ton of control over your immediate reactions. The issues comes up when you start to get convinced by your own narrative that you are writing here and let that impact your behavior. So, in this scenario, you might convince yourself that he doesn’t really want to hang out and get embarrassed and a little irked. So after a few minutes of totally overthinking, you respond something like, “I mean, I guess we don’t have to. Never mind, I’m sure you have better things to do.” To which he replies, “Oh alright.” Then suddenly you have no date and you have no idea truly what his initial response was meant to communicate. There are infinite possibilities for what he was actually trying to communicate. He could be totally excited but trying to play it cool. He could be using voice texting and his actual tone of voice would have been much more enthusiastic. He could have been in the middle of something else and didn’t give a whole lot of thought into how his text would come off. In terms of an exercise that you can do, this is where writing things out on paper can really help. What happened? How did I emotionally respond to it? Why did I respond in THAT way? How do I know that my assumption about the situation is true? Could I think about it in a different way or gather more information?

Understanding why you overthink

Sometimes there is nothing to be done about your overthinking. Sometimes you can just chalk it up to overthinking and focus on not letting it hold you back. Other times, it may be appropriate to try to cut it off at the pass by actually trying to get the answers you are looking for. At a certain level, overthinking is often your brain scrambling to cope with unsolved problems and missing information. In many circumstances, this can be solved by communication. In the example above, you could text again and say something like, “Hey – just want to make sure a movie sounds good to you. I couldn’t really tell from your text. It sounds fun to me, but I’d also be down to do something else if there is something that sounds funner to you!” From that, you may be able to glean some more information. Maybe they say “Oh sorry – yeah I was getting yelled at by my parents when you sent that. I’ll see you this weekend!” or “Yeahhhh I’m not a huge movie fan to be honest. Wanna just get dinner and hang out instead?” or even “Ugh. Sorry. I really want to see you, but I also have plans to go hiking with John. I’m trying to figure it out.” These are just all hypothetical responses. It could be anything. They could even still be pretty short and just respond with a “Nope. Sounds good. See you then.” In which case you might just be seeing their style of communicating. Communicating openly and asking for information is honestly a very underutilized tool.

Ways to address your pervasive thoughts

Something else for you to think about regarding overthinking, in general, is just that it is very hard to force yourself to stop thinking about something. We don’t really work that way. The more you avoid trying to think about something and force it from your mind, the bigger and more overwhelming it tends to get. There are a couple things you can do to help yourself not be so bogged down by overthinking, though. Instead of forcing yourself to push the thoughts out of your mind, you could instead work on bringing other thoughts in. For example, you might have nagging thoughts about what might happen in the future, but if you have something right in front of your face that you are focusing on, those worries are going to have to compete for space with your current focus. Overall, we want to try to limit the ways in which overthinking limits you.

If you are being driven crazy by running through potential scenarios in your mind, try to get practice doing the things that you need and want to do WITH the overthinking in the background. Rather than waiting for the fast and furious thoughts to go away, try to get better at doing things with them in the background. Simply changing your physical location can help as well. Something as simple as going to a coffee shop, going on a walk, or even just to another room can help to break the frame a bit and slow down the overthinking. Mindfulness is a great tool here as well. Rather than avoiding thoughts about the past or the future, allow them to exist and work on being less judgmental of them. They aren’t good thoughts or bad thoughts, they are just thoughts. You can give them a moment of recognition, recognize what they are, and then allow yourself to focus back on whatever it is you want to be focusing on in the present moment. If you have nothing going on, this can be problematic. If all you have is time and space to sit and overthink, then your overthinking is more likely to expand and fill your time like a gas. If you have things that you are actively engaged with and distracted by, suddenly there is not as much space for that overthinking to expand.

Give your worries time

One thing that I have noticed is that a lot of times, we have a worrying or distressing thought, but we don’t actually give it the time of day. We have the worry and then just try to shake it off and pretend like it’s not there. Instead, you can actually approach the worry. Give yourself some time to work it out in a productive way instead of just letting it be a boogeyman. Think about why you are worried about that thing or why you are dwelling on it. Ask yourself if there is another way of thinking about it. Ask yourself if there is anything to be done even if your worry were true? Does it change anything? Spend the time addressing the fear and then moving on from it rather than just letting it linger.

I think a lot of your mental exhaustion probably comes from the feeling of fighting with your thoughts. Some of the techniques that I talked about here may help you to fight with them less. Instead, you can approach them or at least accept them. You aren’t doing anything wrong by overthinking. You just want to try to reduce the amount that it is impacting your behavior.

The last thing I will say is that sometimes overthinking and lingering thoughts come from things being left undone. For instance, if you have issues from the past that were never resolved, they may plague you in the present. If you have not adequately prepared for something in the future, you SHOULD be worried about it. In these cases, there are actual actions that can be taken to resolve the issue. Your overthinking might actually just be procrastination in disguise sometimes. This stress could potentially push you toward action. Once you actually resolve the situation, you won’t have as much to overthink about.

Thank you for the question. I hope this helps a bit! Of course, if you find that no matter what you do, you can’t stop this from driving you crazy and causing you serious discomfort in your life, seek out some professional help to get a closer look at what is going on!

You can listen to this on Episode 305 of the podcast! 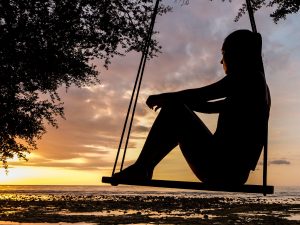