Why Do I Have Paranoid Thoughts?

In episode 296, I received a question from an individual struggling to cope with constant paranoid thoughts, wondering if it’s related to past trauma or from their history of using marijuana. In this post, I expand on my thoughts and take a look at what you can do to help.

Hi Duff, I just found your podcast and am really enjoying it. I was diagnosed as bipolar I in college and have had a few major episodes, but not as many later in my life (34 now). For the past 3 years I have had this thing where I have a constant paranoid script in my mind — people always judging me and talking about me. It’s debilitating and never shuts off. I have used every anti-psychotic to no avail. I published a book around the time it started, I was also heavily using marijuana, and it’s pretty much like having a bad, paranoid marijuana trip constantly. I just want to know, could I have permanently altered my brain from using marijuana? Or is this a trauma thing? I have had so many different doctors weigh in and they have no idea what to think about it. Just curious if you do…

Hi, thank you for the question. This is a really interesting one. Unfortunately, it’s unlikely that I’ll be able to solve this for you, but I’d like to try to give you some things to think about.

First off, just want to clarify for everyone out there what Bipolar I means. Bipolar one is when you have major depressive episodes and full manic phases, which can include impulsive decision making, grandiosity, the feeling of being highly energized and creative, and even feeling like you are bulletproof, as though nothing can bring you down. Other people can be more on the agitated side of the spectrum. Either way, there is a lot of physical and mental energy at work during mania and people often sleep only 1-2 hours during these phases, not because of insomnia, but because of a decreased need for sleep and too much agitated energy. Mania can be pleasurable and euphoric, but it can also be devastating. There can be impulsive spending, poor decision-making, sexual or drug risk-taking behaviors, and other aspects that can put the individual in danger or tear apart their relationships.

After a manic phase, someone with bipolar often crashes into a depression and may have to clean up the wreckage from the storm of their mania. At the severe end of the spectrum, you can also have symptoms like psychosis. The primary treatment aside from therapy for bipolar are mood-stabilizing medications. These can be compounds like lithium or sometimes antipsychotics like Abilify or Seroquel, or even anticonvulsant medication like lamotrigine. These serve the purpose of lessening the intensity of the swings that happen in bipolar, specifically the mania.

Now, your situation is interesting because you have developed a new symptom of paranoid thoughts of people judging you and talking about you. One of the things to consider here is whether this script that you described is consistent or inconsistent with how you see yourself. In other words, do you believe that these voices are true/real or do you recognize them as intrusive and out of place, causing you discomfort? The first possibility would more likely be a legitimate psychotic symptom where you are having some mild paranoid delusions. You can recognize that it’s not the way that other people see things, but it feels true and real to you. The second would be more like the intrusive thoughts that you see in obsessive-compulsive disorder. It’s an unwelcome outside thought that crashes into your awareness and causes you distress.

You said that you have gone to different doctors to weigh in, but I would ask what kinds of doctors? This is definitely going to be outside the scope of primary care. A psychiatrist would be a great specialist to see. They are going to be more versed in these sorts of symptoms and potential treatments. Given that you said you’ve tried a bunch of antipsychotics, I’m guessing that you may have done this already. How about a neurologist? A doctor that focuses on your brain. I don’t want to freak you out of anything, but if you have not yet gotten something like a brain MRI, that might be a great thing to have. There’s a chance that they will find nothing, but it could also be the case that there is some sort of organic dysfunction in the brain that is leading to these new symptoms. I don’t know if you are on other medications, but that is also something to be looking at. For instance, individuals that take dopamine medications for Parkinson’s disease can get psychotic symptoms due to excess dopamine in their frontal lobes. There are also medication side effects, nutrient deficiencies, metabolic issues, or chronic infections that could be leading to the change.

Let’s say that what you are experiencing is a new emergence of psychosis. This is conceivable. Schizophrenia for instance follows what’s called the diathesis stress model, which suggests an underlying genetic vulnerability and then some sort of activating event or stressor to kick it off. It sounds like there is a distinct period of time in your life that could apply to. I mentioned this in a recent episode, but there has actually been a surge in first incidences of psychosis due to the stressors caused by the pandemic. There’s also the possibility that you have just had a terrible time with the stress of your book release, the pandemic, and probably other factors. You said that you were using a lot of marijuana at the time. Was that to self-medicate and cope with things going on at that time? Were there other substances involved? With all of these together, your depression could simply be pushed to the point that you are starting to get some psychotic symptoms.

If you aren’t working with a therapist or psychologist right now, I would really suggest it. Digging into things on a consistent basis, like weekly, can help to further illuminate the real source of this symptom. You can also work on ways of coping with it. It could be based in anxiety, obsession, psychosis, or mania. I’m not sure. But what I do know is that it’s going to take someone sticking with you over time probably to get a feel for the symptoms, what they might mean, and how to best cope with them.

You can listen to this on Episode 296 of the podcast! 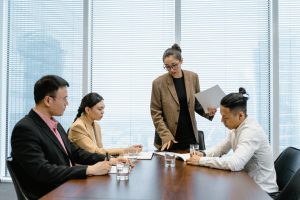 Episode 296: Constant Paranoid Thoughts & Dealing with a Toxic Workplace
Hello, friends. In this episode, I address two very different questions relating to dealing with constant paranoid thoughts and whether…