How Can I Help Someone Recover From Tragedy and Trauma?

In episode 273, I received a question from a listener of the podcast concerned about their son who lost his partner in a fire. In this post, I take a look at the issues that can follow tragedy, such as trauma and PTSD, and offer my thoughts on how you can support someone who is dealing with the aftermath of a tragic incident.

I’m looking for a podcast that would apply to my son who lost his house in a fire and his partner of 17 years, but he survived. I have no expertise but seems to be experiencing
I’m thinking right now podcast forum is best for him. We are taking baby steps. If it takes several just plz provide me links to them. Thank you, Mom

I’m sure there are multiple podcast episodes that would be helpful, but I wanted to record something specifically for him. Given that I live in an area that has had devastating fires, I have seen people with very very similar situations. It’s devastating and I wouldn’t wish it on anyone.

Regarding his deteriorating work situation, of course he is having a hard time with work. I think it’s absolutely expected for him to struggle with work and daily life given the situation that he has been through. His entire life has been turned upside down and he may be resolved to get back to “normal” and to try to do a good job in life, but it’s unrealistic to expect things to bounce back quickly. Of course, one has to continue to put food on the table and such, but there also needs to be some understanding that things aren’t going to be anywhere near normal for a while. Everyone is different in terms of how they respond to extreme events. I’ve parroted this knowledge numerous times from Laura Copley, but trauma is not the event, it’s the body’s response to it.

Some people go through extremely disturbing events and have natural resilience that prevents them from being traumatized by it. Other people go through the same event and develop full-blown PTSD from it. A lot of times, in a situation like this, you won’t really know the full impact of the event until some time passes. So what you can do is focus on preventative factors and also develop an understanding of what trauma is and how it works.

Trauma essentially causes your brain and body to store the memories of what happened differently. Rather than feeling like a foggy recollection, they feel very real and immediate. As if the event is happening to you all over again. When someone has PTSD they may have flashbacks or vivid dreams, they can have hypervigilance and be on-edge/easily startled as their brain works to keep them safe by constantly scanning for danger, they may have emotional changes like anger outbursts or depression/isolation, you can see emotional detachment, and you can sometimes see self-destructive or sensation-seeking behavior.

As you can probably tell, there are many different ways that PTSD can present in different individuals. For someone like your son, it may be helpful for him to just learn a little bit about the different ways that it can present. One picture of PTSD is a person on edge, lashing out, and avoiding the whole world because they don’t want to get into situations that are triggering for them. Another picture would be someone who is completely numb. They are going through the motions of work and putting their head down. They are not lashing out at others, but they are also totally disconnected from other people. They also engage in avoidance, but it’s much more of a private experience where they are avoiding their own thoughts and feelings.

I think that the avoidance part is really worth understanding. Avoidance is really what makes PTSD bigger and locks it in. Avoidance is not always super overt. It can be specifically avoiding sensory triggers that are associated with the trauma. Or it can simply be avoiding the thoughts and feelings that come with the topic. People will use things like alcohol or extreme activities to avoid thinking about the event that happened.

It’s interesting that this situation involved a house fire because I’m working with someone that used to be a firefighter and they described how they would go to the bar at the end of their shift and how they would get into extreme activities like dirt bike riding, partying with excessive drugs etc. They didn’t really understand it at the time, but this was them avoiding those feelings from catching up. Later on, a lot of them went on to develop PTSD. They would become violent and agitated easily and some didn’t make it because of the depression and darkness they felt. All of this is to say that trauma can be insidious and it’s important to at least acknowledge the possibility.

One of the main things that can be done is to avoid avoidance. This doesn’t mean that he needs to talk about the event constantly, but he should be careful about how much he is active avoiding the topic and the thoughts and feelings that come along with it.

There are a million things going on for him right now and if possible, it would be amazing for him to have someone that he can talk to about them. Even if he doesn’t think he has much to say, it could be helpful for someone who understands trauma to be able to talk with him about how it works and to help him tease apart what he is going through. He not only has the vivid terrifying experience that he went through, but he lost someone dear to him. He may feel a ton of guilt about this. Not just for surviving, but the brain finds funny ways to make it our fault. Like there’s something he did or didn’t do that made the fire happen.

He also has to go through a grieving process for his life. The life he had before this happened to him. He can have an amazing life still. He can get to a point where the pain isn’t present in every single moment, but it won’t be the same life. It’s not going to be the life he was building and imagining. That version of his life has to die. And that’s incredibly hard. It’s incredibly hard and most of us aren’t build knowing how to deal with all of that. So having a guide and a confidant to feel this out with would be so valuable. Even if it’s just one person.

He very well may not have the emotional language to describe and understand what he is going through right now, so your support and the support that comes from other loved ones may need to be a little more concrete. For instance, getting a food giftcard to relieve some of the burdens, or taking care of tasks for him. Simple things like that can mean a lot. And then just being patient and understanding. Regardless of how much support and resources you provide- nothing is going to make it better. Unfortunately, time is going to have to play a role here. There is no getting “over” something like this, but he will be able to get back to a life that is more stable and makes more sense. The harsh sting of what happened won’t be present in every single moment of his life. But that takes time. So he’s allowed to be in low-power mode, he’s allowed to struggle, but he should not avoid this either. Be careful about pushing too hard, which I can tell you are already doing. But let him know that he’s not alone, that he’s not doing anything wrong, and that he should get some additional support to make sure this doesn’t lock into full-blown PTSD.

You can listen to this on Episode 273 of the podcast! 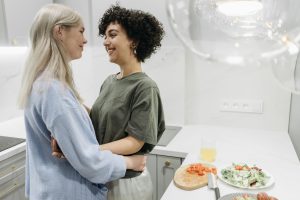 Episode 273: Recovering from a Disaster & Overcoming Codependency
Hello, friends! In this Q&A, I take a look at two questions relating to coping with grief and survivor's guilt…