Why Do I Remind Myself Of Trauma?

In episode 287, I received a question from an individual who, through working with a therapist, has discovered they have a strong need to create reminders that their trauma happened, manifesting in self-harm. In this post, I explore this in more detail, take a look at the possible reasons this might be occurring, and offer my thoughts on how you can begin to overcome this.

Dear Dr Duff, I have a somewhat specific question. I’m in therapy for childhood trauma no one but the abuser knows about (years of physical and verbal abuse). Me and my therapist discovered I have a strong need to create reminders for myself that my trauma really happened. I do this with self-harm and cannot let it go. I have irrational and somewhat intrusive thoughts and fears saying that if I stop self-harming, I’m admitting the trauma never happened. I can go several weeks without harming myself but eventually, the voice inside my head starts nagging me. My therapist says I’m putting up a memorial for everyone to see since no one in my life knows about the trauma. Also, I turned out OK, I’m quite successful; that’s great of course but it’s not helpful with this need for reminders. There is nothing about my life that would imply anything bad ever happened to me. Have you ever heard about anything like this? What would you recommend? My therapist admitted she’s never encountered anything like it but will do some research to see how we can approach this. Thank you and have a nice weekend!

I want to first say that doubting your own experience and memory of what happened is totally normal. This is a common situation, especially when nobody else knows about it. If you had any continued contact with your abuser, they are certainly going to be motivated to minimize the abuse, so you would be made to feel like the crazy one. That can be part of the cycle of abuse. Without other sources of validation, you are just left to doubt your own experience, which can be isolating and confusing, especially when nobody else knows what happened.

I like to think of mental health issues as their own entity or organism. Mostly any organism is going to try to keep itself protected and alive so that it can fulfill its purpose. Filling you with doubts and uncertainty is one of the ways that your trauma gets to keep itself secret and sacred and locked away in a box that you are scared to open up. It gives it a whole lot of credit and potential power over you.

That’s interesting what your therapist said about this being a memorial so everyone can see that your trauma happened, since nobody really knows about it. I think there are elements of that that are plausible. There is also a phenomenon in psychology where you feel like you need to justify the emotions you are feeling or the difficulty you are having. In other words, you know how much you have struggled from the way that this trauma has impacted you, so it would be devastating for you to “realize” that it was all for nothing because it was based on something that never happened or wasn’t as bad as you made it out to be. It makes sense, right? You know the way this has become central to your personality. It’s almost like a sort of imposter syndrome where you feel like the focal point of your life might be a lie. Another thing that struck me is how similar to the OCD pattern this is. In OCD, you often have compulsive behaviors that are tied to an obsessive thought. In this case, your obsessive thought would be that your trauma never happened, and the compulsive behavior is the self-harm. A different example might be that if someone doesn’t call their mom before going to bed, they are going to die.

Another interesting way that the whole justification thing could be playing out would be if you actually weren’t as traumatized as you think from what you’ve been through. Was what you have endured terrible and affected you? Certainly. But that doesn’t necessarily mean that it was traumatic for you. It’s something that could easily cause many people trauma, but that’s such an individualized basis. So let’s say that what happened to you made an impact on who you are as a person, but as you mentioned, you have been able to really do well for yourself. Maybe you don’t have flashbacks, the emotional lability, and other symptoms that are characteristic of a trauma response. But how could that be? If you aren’t suffering actively in each moment, does that mean it really wasn’t that big of a deal? I hope you see what I’m getting at here. The self-harm can be your mind’s way of justifying the intensity of what you experience in the absence of other traumatic symptoms. As long as there is some serious physical impact, you can feel justified in the magnitude of what happened. It’s an illusory correlation and it’s not a helpful logical way to think about it, but it makes a certain kind of sense.

I’m telling you these possibilities in the hopes that they might adjust the way that you are approaching things in therapy. Maybe an exposure and response prevention approach is going to be more impactful, as you might use in OCD. Maybe simply recognizing the fact that you can have terrible things happen to you and be resilient to them without being fully traumatized can help you to break this link we were just talking about. I think that one thing you could definitely try out is talking about your experience. Sharing your story with more people. It may not be the most comfortable or safe-feeling thing to do this with people that you already have in your life, but what about something like a group for trauma survivors? This is a great opportunity to recognize that you don’t have to be actively struggling in life to make good use of something like therapy or group therapy. Sharing your story and hearing from people with experiences that you may be able to relate to can be a very healing experience and help you recognize that what you have experienced matters.

You can listen to this on Episode 287 of the podcast! 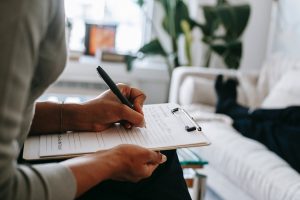 Episode 287: Doubting Your Own Trauma & ADHD Misdiagnosis
Hello, friends! In this Q&A episode, I take a look at two very different questions relating to working through past…