Hello, friends!! Today’s episode is a question and answer session. I think it turned out pretty well despite some annoying flooding that happened in my office this week. Here are the questions that I answer in this week’s episode: 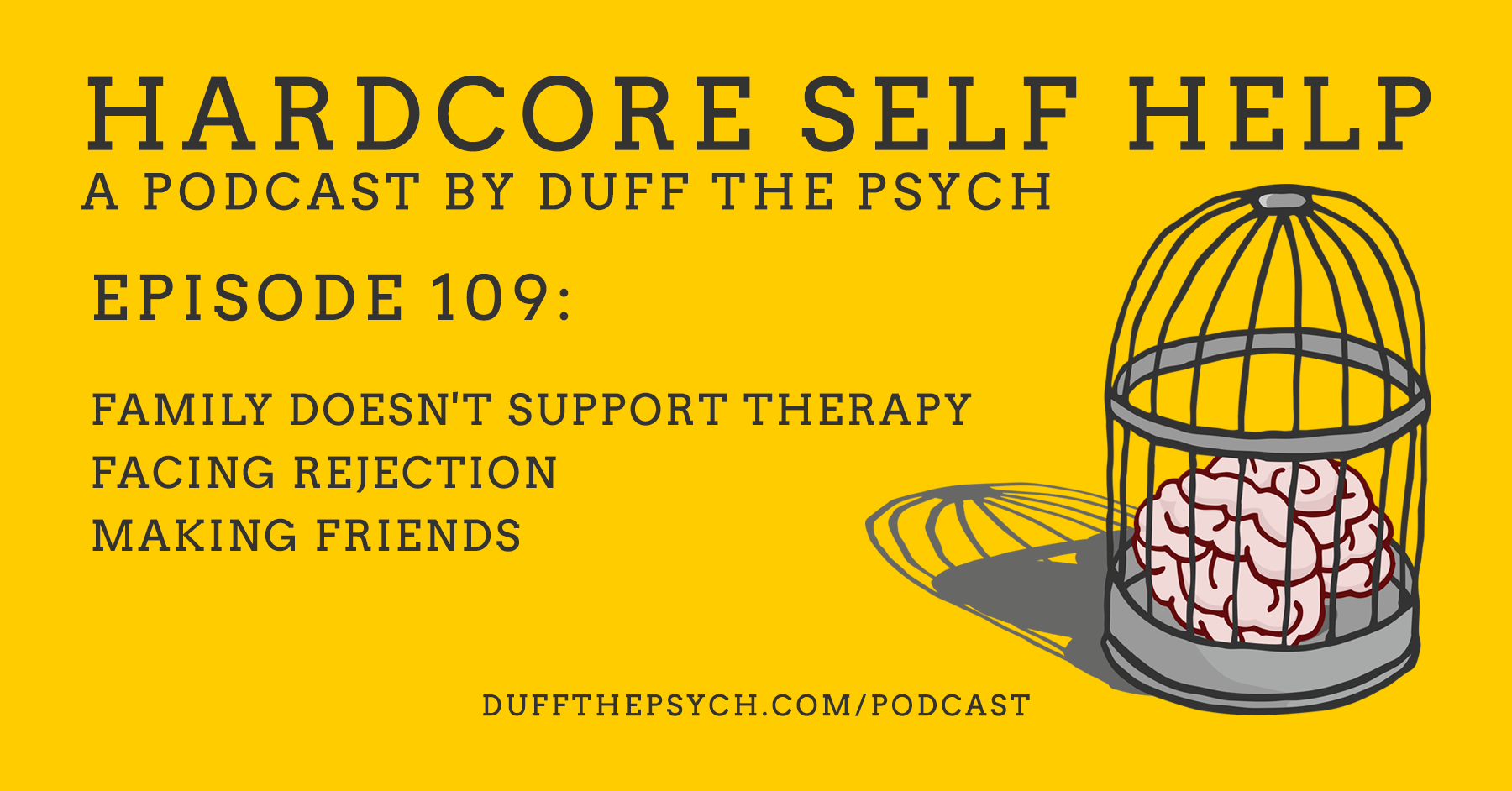 How do you deal with parents that don’t support going to therapy? My stepmom hates the idea I’m in therapy. She doesn’t know that the reasoning because I don’t feel comfortable talking to her about that sort of stuff.

First off, she doesn’t need to like the idea. It’s for you, not for her. Family is great, but they can’t help you in the way that a therapist does. Aside from the training and specific techniques, a therapist is someone who is by nature not a friend or family member, they are outside of your system and that helps them to show you a more objective take on things. This is really important to understand for all parties involved – going to therapy does not imply that your family failed to help. This is something else. If you have a supportive family in addition to therapy, great! That makes things even better.

One possible reason that your Stepmom is reacting negatively is that she may feel insecure. It may feel to her like you are talking behind her back or something like that. Again, that’s something that she is just going to have to get over, because that’s not what therapy is all about. You are inevitably going to talk about your family and close relationships, but it’s not to shit on them. It’s because they are important to your experience and you interact with them often.

If you wanted to help her be less threatened by your therapy, you could let her know that you are not just complaining about your family or something like that. Tell her a little bit about what your therapy sessions actually look like (within a limit that you are comfortable with). You could also assure her that this is not because you feel like you cannot go to her or your family with your problems, but that this is just like going to any doctor or trainer. It is effective specifically because it is not coming from a family member.

So I just started college and it hasn’t been how I expected it to be. I have never had a close friend in my whole life and I was hoping that it would change in college. It hasn’t. I feel like I have gotten even more isolated because I don’t even have acquaintances anymore. I am not sure how to make a connection with people. Do you have any tips?

This is totally real and valid! College can be so many different things and in fact, we tend to have a lot of pressure placed upon us to make college the best time of our lives.  The reality is that all sorts of different college experiences happen and your experience may change many times while you are there. So you didn’t do anything wrong to be in the situation that you are right now.

One thing that is important to ask yourself is whether you are happy/satisfied or whether these issues that you mentioned are causing you significant stress or emotional difficulty. You’re allowed to not hang out with people a lot if that is your preference.

However, if you are feeling bad due to your isolation, it’s definitely worth paying attention to. My best advice for how to make more friends and acquaintances is really conventional, but it’s to get involved. It’s hard to spontaneously make friends out of thin air. Likely a lot of your friends from the past, you probably met through a mutual activity, right? You don’t have to put yourself way out there and join student government or something, but keep your eye out for fliers, facebook events, etc. Join a club that has to do with one of your interests.

Another thing that you can do is to follow up with people that you may have interacted with previously. Like if you got someone’s phone number for a group project. Text them with something funny that you saw or ask if they want to go to an event with you after the project is done.  Don’t start with trying to have a close friend. Just start with having someone that you talk to every so often and build from there.

You said that you haven’t had a close friend all of your life. Why do you think that might be? I wouldn’t want to make the assumption that you are neurotypical. If you are on the autism spectrum or have any other difference that makes you interact with others in a different way, that should be considered as well. Your relationships may need to look different than other peoples and center around activities or topics that are maybe a little less conventional.

The other thing that I want to say is that you are probably being pretty hard on yourself. You said that you just started college. You may need to give it some time. It takes time for the opportunities to pop up and for organic friendships to start. Overall, at this stage, you will want to try to not put too much stock in whether you are doing it right or not. It takes a little courage to put yourself out there, but you are also in a position where you have nothing to lose. You said that you already don’t have any close friends, so failing to make a close friend just keeps you in the same situation and you learned a bit from your experience.

People are lazy and sometimes people will not follow through or answer your texts. That’s okay. One of the great things about being in college is just the amount of people that are out there. If one relationship doesn’t become the awesome friendship that you were hoping for, there are essentially infinite other people to connect with. But again, the best way to start having opportunities for these organic relationships is to get more involved. Instead of just walking up to someone and saying hi can you be my friend, it is a whole lot easier to have a common activity and then start the friendship by just talking about that activity and then build from there.

For as long as I can remember I’ve struggled with fear of confrontation. I really have a have a hard time dealing with people being upset with me or even just being upset around me. I think it has something to do with my dad having been verbally abusive with me growing up. He never cursed at me or insulted me, but I remember him being very upset and yelling when I would do something he didn’t like or failed to meet his expectations. Maybe that’s why I became a perfectionist later in life. Anyway, this is a source of great social anxiety for me and I just think my life would be so much better if I could get over it. I’m about to start a company and prospecting will be crucial to its success; I’m terrified of the rejection and anger that I will inevitably be met with when making cold calls. I tend to take everything so personally even though consciously I know that’s silly and doesn’t make any sense. What can I do to start getting over this fear of people being angry with me? I want to develop thick skin. Any advice would be greatly appreciated, thanks.

Hey first off congrats about starting a new company. You said that you are a bit nervous and scared about confrontation, but that definitely requires some courage. Kudos!

Next, it’s super common to be sensitive to criticism. Nobody that I know likes being on the phone, especially when it involves cold-calling. I think that your hesitancy is totally reasonable, especially with what you said about your father and your perfectionist streak.

First, an obvious answer – it takes practice. The cold calling thing gets better after some repetitions. You likely avoid the phone like the plague. That avoidance of phone conversations makes the anxiety about them get bigger. If you instead begin to face it head on, it will suck at first, but you will acclimate over time and it won’t be nearly as bad. With repetition, you can desensitize yourself to the sting of what you are considering to be rejection or failure. This is also a good opportunity to practice something that I like to call defusing dangerous thoughts.

Sometimes we have a tendency to build up scenarios in our heads and we worry about what might happen. More than that, we predict that something bad is going to happen. This is even worse when you have anxiety. You can work to defuse those dangerous thoughts by actually trying to play them out. So what if the person on the other line says no? What then? Well  nothing really, I’m just on to my next call and I will never hear from that person ever again.

What if I sound stupid or accidentally mess up my pitch? Well you always have options. One option would be to make light of the situation and go “Oh shoot, I totally lost my script. Anyway, let me break it down for you…” or you could call back and try again another time. Or you could simply write some notes to prevent that from happening with the next one.

The point is, you always have options, and when you give yourself to recognize that there are options, suddenly that feared thing isn’t quite so scary. If you haven’t checked out my book, content on the blog, etc. I also have some methods for challenging your thoughts such as the ABC thought log.

Essentially you want to treat your immediate dangerous thought as a hypothesis or a guess and work to find some reasonable evidence to prove or disprove it before reacting. Honestly, I think your insight about your dad was good, but you probably don’t need to dive deep down and find the true root of all of this to fix it. It’s going to be much more based in behavior and just getting some practice.

Be sure to keep in touch on Twitter and Facebook since I will be announcing the PRE-LAUNCH of the Kick Anxiety’s Ass online course THIS WEEK. You want to get in on this, I promise.

Episode 329: Feeling Aroused After Therapy & Preparation For A New Therapist 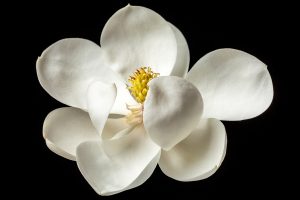