Episode 112: The Psychology of ASMR

In this episode, I do something a little different. This is a highly requested deep dive episode into the psychology of ASMR, or autonomous sensory meridian response. You know, those videos where people tap things and whisper on youtube? I used to make those videos. For almost 6 years, in fact.

I talk about what ASMR is and give examples from different videos. At the end, I even give you a bonus ASMR audio sample recorded by yours truly. Enjoy! 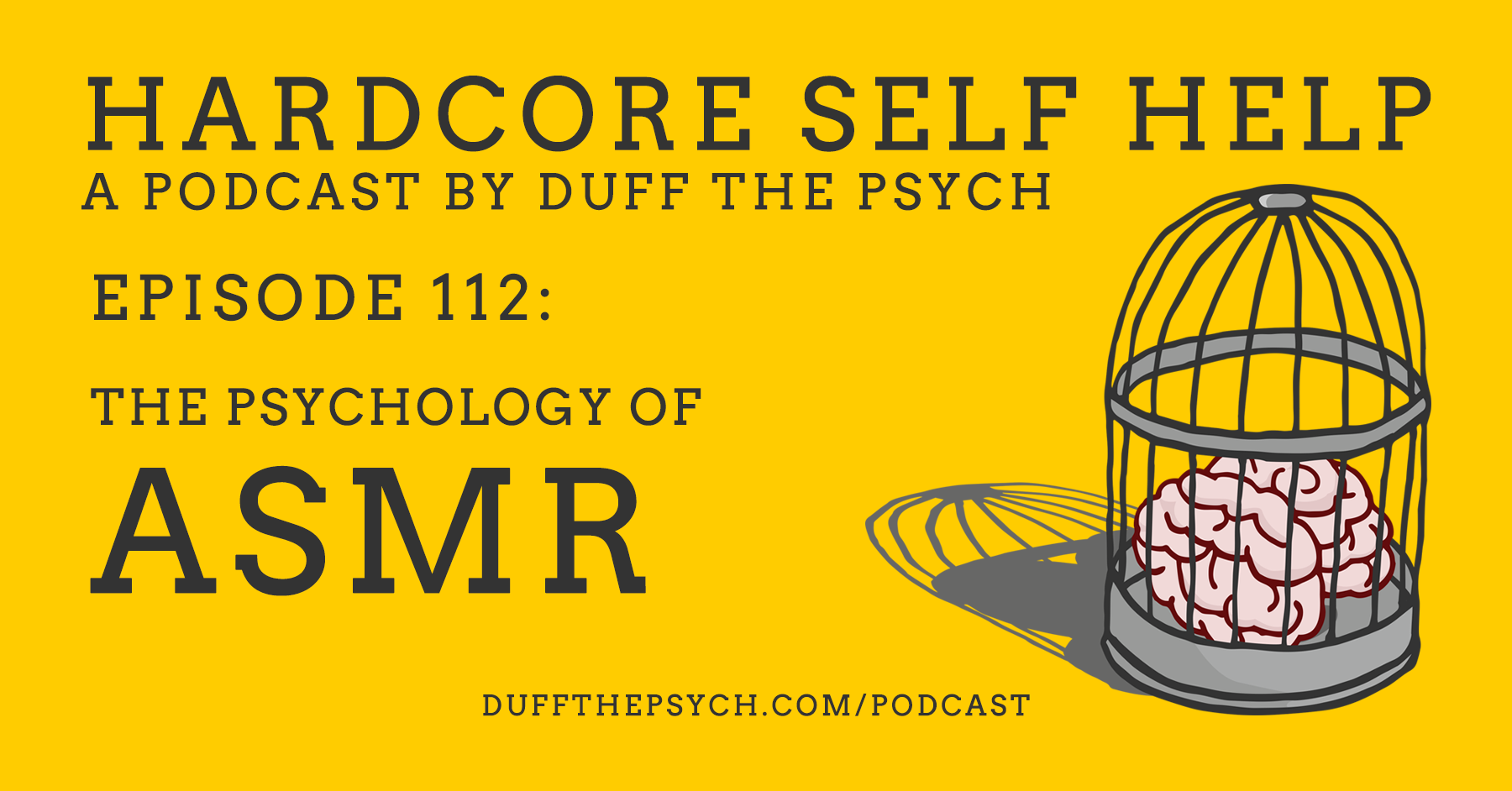 Let me start with a story – Back in 6th grade, we did a science camp. That means we did a little trip to this ranch where we stayed in cabins with the other students and learned about sciency stuff out in the wilderness. There was one encounter that I remember vividly. My group was gathered around the fire at night and one of the female camp counselors was teaching us about geological concepts. She had just the most soothing and engaging voice and while I was staring off into the flickering flames listening to her teach us about magma, my head and neck starting tingling. That was one of my first memorable experiences with ASMR.

ASMR is just a total psuedo science term that the internet made up to describe a common phenomenon. It stands for autonomous sensory meridian response. What it refers to is the pleasant tingling feeling you get in your scalp and neck that sometimes also radiates down to your shoulders, back, etc.

The sensation is triggered in different ways for different people. For many, it is triggered when they are in a situation where they are being paid close attention to, like when your teacher leans over and helps you with a problem on your worksheet in school or when you’re getting an eye exam. For others, it is much more sound-based, they might get it from a particular type of accent that they find pleasing or when someone quietly whispers to them. Certain types of tactile stimulation can also generate the response for people. For instance, I always get it when someone plays with my hair. I also used to always get it on the bus when we played that game where one person would draw one the other’s back and the person being drawn on is supposed to guess what they drew or wrote.

For many people, they describe the sensation as pleasant or even relaxing or soothing. When you’re in the middle of it, it can even feel trance-like. Different people have had different names for it. I’ve hear them simply called head tingles or even head orgasms. I’ve also heard it called shocks or chills. It is a different sensation from that rush that you feel when you watch or hear something really profound like an epic scene in a movie. That’s called frisson. It’s basically the opposite of misophonia, which is basically the nails on a chalk board icky feeling that people get from certain sounds like a clock ticking or someone chewing with their mouth open. Funny enough, many types of sounds tend to elicit ASMR from some people and cause misophonia in others. We really have no idea why. There is currently some research being done on ASMR, but it’s very limited. Mostly it’s been to describe what sort of people gravitate toward ASMR and what benefits people seem to derive from it. We don’t know why or how it happens.

My experience with ASMR

I mentioned that people seem to get benefits from it. There is this really interesting thing that has occurred, which is that people have begun to put out video and audio content that is designed to elicit ASMR in people. Many of you already know this, but I recently “retired” from making ASMR content on YouTube, which I had been doing since 2012.

I first encountered ASMR content when I was going through my comprehensive exams in graduate school. Thinking back it may have been before that, but this is when I really started using it. I have always found video tutorials where someone is showing massage techniques or yoga poses relaxing and occasionally they would trigger that tingling sensation for me. I would seek these sort of videos out when I was going through my comprehensive exams while I wrote or studied because I was so stressed and this would help me stay calm. After searching for things like calm massage videos, relaxation, soothing, quiet etc. I stumbled across the world of ASMR videos.  Shortly after, I started making them myself.

There are many different types of videos that people make to help people achieve ASMR. In general, the stimuli that generate the feeling of ASMR are referred to as triggers and videos are generally based around a specific trigger. You might come across a tapping video, such as someone tapping on the spines of books or on a ceramic cup.

Another very common trigger is whispering or softly speaking. This is one that gets me. If I’m in a class or an event and someone leans over and whispers something in my year, it usually blows my tingles up. Here’s an example of whispering in an ASMR video:

As I mentioned before, personal attention or closely focused intimate situations can also generate ASMR for people. There are a couple classic videos that people have gravitated toward because they cause them ASMR. One is a neurologist doing a cranial nerve exam on the hockey player Pat LaFontaine. Another is Mor the saleswoman at the mall kiosk. This is what’s referred to as unintentional ASMR – videos that were not designed to make someone get ASMR, but they work out that way. Other videos that can cause people ASMR are things like haircut videos, massage videos, shoe shine videos, or videos of craftspeople doing their work. The classic example is Bob Ross.

Now because of this personal attention trigger, people have started making role play videos in which they simulate one of these experiences with the purpose of triggering ASMR. Here’s a classic example of a cranial nerve examination role play.

Interestingly, one thing that people have found to be triggering is binaural audio, which is basically stereo sound designed to mimic what your ears actually hear. You might also hear to it referred to as 3d sound. Here’s an example of binaural audio in an ASMR video.

Here is an example of someone putting it all together – using binaural audio, trigger sounds, and personal attention.

People report a variety of different benefits from ASMR, but the majority of people seem to use the videos to help them relax and fall asleep. Others report that it helps to ease anxiety or soothe pain. Again, there is no scientific verification of this other than the fact that people tend to report these benefits.

The Psychology of ASMR

So as a psychologist, what do I think of ASMR? I think it’s great. I think that it provides people with a way of being relaxed and mindful. To me, it’s like a way to hack your brain into relaxation or into a meditative state. If you feel a benefit from this type of content, you should definitely use it. Some people have found that their “tingles” go away after a while from watching too many videos. Others seem to still get tingles no matter what. If you are finding that your tingles have gone away, usually it’s as simple as taking a little break for a few days.

You can certainly use ASMR content just because it makes you feel good and you enjoy the sensation. If you want to use it for stress relief or to help you sleep, you will want to be careful to not over-saturate yourself with the content during other times and mainly use it for those purposes.

As I said, I started making ASMR content back in 2012 and just recently stopped earlier this year. They are hard videos to make and require just the right conditions, such as low background noise, to record. I don’t have the time to devote to them anymore and I’ve mostly just moved on to a different phase of my life and professional career. There is ASMR content on YouTube going a back even a few years before when I got started. Now it has become super popular. There is even a whole series by W magazine where they get celebrities to make ASMR videos. It’s definitely worth checking out.

Here are the videos that I used samples from:

If you want to watch more of my ASMR videos, you can find them in the archives of my YouTube channel. 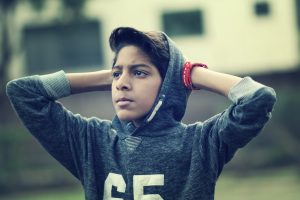 Episode 111: Repressed Memories, Processing Loss, and Depression at 15
This was a really good episode thanks to the awesome questions that I was sent in. In fact, I think…