Episode 157: Unfu*k Yourself with Gary Bishop

This episode features an interview with the author Gary John Bishop. He wrote the best seller Unfu*k Yourself and juuuust released a new book called Stop Doing That Sh*t.

We had a great conversation about what people can do to start moving forward with their lives and we even dive into the personal story behind why Gary started making this type of content.

Before we get into the interview, I want to congratulate this week’s book winner, Sarah Murphy, who left an awesome review of the podcast on iTunes – thank you! If you want to win free stuff, just write a review of any one of my products and send me an email or social media message with the proof and I’ll consider you for the next giveaway. Sarah, I’ll be contacting you to send out a free print copy of either one of my books.

Getting to know Gary Bishop

Gary is the author of two books, the New York Times bestseller, Unfu*k Yourself, and the newly released Stop Doing That Sh*t, which just came out May 7th. Originally from Scotland, Gary has lived in the US for the last 24-25 years. It all began about 12 years ago when Gary did some personal development work at the advice of a relative, which really opened his eyes to things he had never really paid attention to. This set him on a continued path of self-development. Within a couple of years, Gary became a senior program director for one of the worlds largest personal development companies. He traveled worldwide doing personal development workshops when he decided to start his own private business around 4 years ago. During this time someone asked him to write a book in his style, which he self-published initially. After 5.5 months he’d sold 30,000 copies and got offers from major publishers. His book, Unfu*k Yourself, is now close to a million copies sold with a major publisher.

Gary’s always been creative and thoughtful, describing himself as somebody who probably ponders on life a bit more than he should. He’s a fan of ontology, which is the philosophical study of being, existence and reality. In general terms, ontology is concerned with identifying and explaining things that exist in our world. Taking an ontological perspective on life made a massive difference to Gary, allowing him to go beyond himself and look at situations in a different light.

Talking about his own audience, Gary tends to work well with people who are looking for something that makes sense to them in a simple way. They’ve got enough to worry about in life without needing 128 steps to figure themselves out. His books appeal to a wide range of people from those who are still figuring themselves out, to people who just need a bit of a jolt to help get them through a difficult patch.

Gary was irked by the self-help space as a lot of the content doesn’t inspire people to break out. He wrote his book partly as a reaction to a lot of what was going on in this space at the time and feels that inspiration and self-love aren’t necessarily going to change things for you. He wanted to give people something they could get their teeth into and act on to make positive change.

Gary shares the interesting perspective behind his book, based on years of coaching, along with the idea that you don’t necessarily have to change your internal dialogue to change your behavior. We’ve spent so many years pretending like feelings don’t exist, but Gary thinks that we might be swinging too far in the other direction. Placing too much emphasis on feelings and giving them too much power.

Embrace where you’re at

Gary highlights the importance of embracing where you’re at. If you’re feeling negative feelings, that doesn’t mean you have to live a negative life. There are always positive days and negative days, but we don’t have to let it shape our whole lives. Gary describes how when he is really engaged in something, the negative feelings are absent by virtue of his being authentically engaged. When he gets out into the world, the experience of being alive is more empowering – when the focus isn’t actually about him. It’s not about ignoring your negative feelings, it’s about acknowledging them whilst realizing you are not tied to act in a way that is consistent with those feelings.

Gary on humanity and taking a philosophical perspective

Gary talks about how many different perspectives on humanity are intertwined in some way. We discuss ontology a little more and Gary talks about some ontological philosophers that he likes, such as Heidegger, and how they influence his work.

Where do people tend to get hung up? Gary describes how as humans, we can overcome just about anything, but we are terrible at letting go. Often people carry deep resentments that they’ve written off as just part of their experience. Gary talks about this in detail and how these aspects shape who we become. As you get older, many people become a more polarized version of themselves. You don’t afford yourself the freedom to be however you want to be like you did when you were a child. People become stuck in some very predictable ways of being and acting which they don’t know how to get out of. However, Gary explains how we can use the knowledge of the past as context to inform what you can do now.

Gary discusses the importance of language and how it dances with being. How you feel and the way you talk are in a dance with one another. How you use language changes your perspective on situations and past events. When you simplify stories from the past by removing the emotional language, it can be difficult to hear, but it can also lead to new understandings of what happened to you. Gary talks about this in-depth and how language shapes so many aspects of our lives. If you asked 5 different people to tell the story of something that happened in the past, you would get 5 slightly different stories, which tells you something about the way language paints perception.

Gary continues by sharing a personal story of his emotional withdrawal from his mother. He fell into the role of becoming the judge, blaming his mother for how a lot of things turned out and thinking of himself as the miracle that overcame all of her mistakes. However, he eventually started to ask himself what it must have been like for her. By approaching her about this and apologizing for judging her, they were able to express love for one another for the first time in decades. He realized:

If I want love in this relationship, I need to bring it.

Gary stopped indulging in the “language of description” – You can’t change your past, but you can change the way you describe it to yourself. But it has to be real and authentic. When he let go of emotional descriptions, when he let go of blame, he was free to stop being defined by it. He realized he was fighting to hold onto something that was sucking the life out of it. We discuss this in detail and how difficult and risky this can seem. Gary described how his family reacted strongly to this change and felt like he had was suddenly on “her side” and talks about how this change in dynamic affected his siblings and family. The people in our lives may say they want us to change, but they are often actually averse to the change because it affects their situation and the reality they know.

Gary talks about the importance of being a loving human being and how in reality it’s much easier to be resentful. He encourages people to mix with others who you don’t agree with or don’t particularly like and feels that it’s important to do so in order to see the humanity in others and be your greatest self.

Gary offers some practical tips for getting unstuck and moving forward with your life. He first invites people to confront how much they have sold out on themselves, meaning they explain their life and the reasons they are the way they are using all external factors. What you fail to explain is your relationship with these factors. Confront that the enemy isn’t what’s around you, but your relationship to what’s going on around you. Your reaction is probably following a predictable pattern. You act in ways that are consistent with those feelings.

Gary always assumed that he was not smart enough, which he realized painted his experience of life. This subconscious conclusion stopped him from engaging with life and doing activities that make use of his intelligence. He tried to talk himself out of writing his first book. Once he started writing for 10 minutes, most of the overwhelming negative feelings faded. He had to teach himself to act out of alignment with his negative emotional state, something he feels we all need to do to move forward.

He encourages people to start with small acts. Pick one way to “interrupt the drift of your internal state” and take a decisive action that is more consistent with the thing you’re after. It’s a practice that you can become better at. These small steps build momentum and help you achieve the life that you’d like to have.

If you are truly out to change your life, your relationship to what you say has to transform. What you say to yourself that you are going to do has to become more important than how you feel. We are great at helping and following through for others. What if you had the same relationship to yourself?

To get the ball rolling in that direction, check out Gary’s books, Unfu*k Yourself, and new release, Stop Doing That Sh*t. There’s also lots of free stuff on his website!

Gary closes talking about his motivation and passion for the work he does and how he hopes that his message can help others. Awesome stuff.

That’s a wrap! I’d like to thank Gary for coming on. If you want to hear more from the man himself then you’ll be pleased to hear Gary is active on Facebook, Twitter, and Instagram and has a newsletter full of quality stuff that you can sign up for over on his website!

This episode of Hardcore Self Help is sponsored by ThirdLove.

ThirdLove do bras differently, promising to design and produce comfortable bras that fit perfectly. Right now head to thirdlove.com/duff for 15% off! 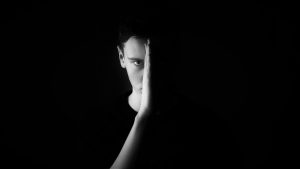 Episode 156: Drug-Induced Psychosis, Distance Jealousy, Dealing with Loneliness
This episode is a straightforward question and answer episode. Not too much preamble in this episode, just straight to the…