This is a deep dive episode where I spend the entire episode talking about one topic of interest rather than taking questions from the audience. In this one, I cover something that I’ve been meaning to talk about for a while, which is the word “trigger” and the term “trigger warning”. I cover what the term “actually” means, where it came from, and my mixed feelings about the way that trigger warnings or content warnings are used these days. A the end, I also give some practical tips for when social media becomes too triggering.

The term “trigger” is not clinical or formal in the world of psychology, and basically means anything that brings about something that is unpleasant. Typically we are talking about trauma, but it can also be in reference to substance abuse, addiction, or anything that is an impetus that brings about something uncomfortable. Typically, however, people are talking about it in reference to PTSD, or post-traumatic stress disorder.

PTSD used to be categorized specifically as an anxiety disorder, but is further subcategorized now as a trauma-related disorder. There are a lot of different ways to define this term, but generally it means you have exposure to something that is real and threatening or dangerous. For example, something that could have killed you, a serious injury, sexual violence, etc. Any type of traumatic, violent, or upsetting event, basically. It can also be experienced in a variety of ways, so something you were personally subject to, witnessing an event in which someone else experienced the trauma, or learning that a traumatic event happened to a loved one. Right now the term is not considered applicable to something you experienced through social media, unless it is part of your work and you have repeated exposure to it.

The main symptom of being “triggered” is having repetitive, intrusive memories of the experience, often called “flashbacks.” For regular memories, you play them in your head and they are almost like a movie. For PTSD, these memories feel like they are happening all over again. You can feel like you are being re-victimized, or have dissociative reactions, or you completely lose touch with current reality. You can also have serious physical reactions, such as panic attacks, which can come about from either external or internal cues. There is an element of avoidance, where you want to avoid anything that reminds you of the experience.

The other context that it is often used in is addiction, so people that are trying to stay sober. They will often have “triggers” that make them want to drink or engage in that type of behavior.

The way that trauma memories are stored in the brain are a bit different. When we convert short term memories into long term memories, we store them with cues. For example, when you have memories of your family as a child, you may have a certain smell that comes along with those memories. You don’t just have the fact; you have the sensory experience that goes along with it. When we have trauma memories, these sensory cues are basically hyperactive.

They help you maintain safety and can be really important, but when the danger is no longer reasonably present, they don’t serve the same purpose and the panic associated is not dangerous.

What are trigger warnings?

Also known as “content warnings,” trigger warnings are basically a convenience to help people with traumatic memories not be thrown into flashbacks or psychological discomfort. They are particularly applicable when you would not expect to run into that kind of content. For instance If you wrote about your journey as an author and your recovery from childhood sexual abuse was part of that, you might want to include a trigger warning for people. Content creators tend to fall somewhere along a spectrum with how liberal they are with trigger warnings. Some just do it for big things or graphic depictions. Others will cover every possible topic on every piece of content.

My Thoughts on Trigger Warnings

If you are still in a situation where your trauma is fresh and potentially still threatening, then of course it might make sense to be sensitive and avoid your triggers. However, when working with trauma, exposure is a big part. When you avoid, you feed your anxiety. As uncomfortable as it is, repeated exposure to your triggers (both internal and external) and the memories helps you to store them in a less threatening way.

Every time you recall a memory, you pull it out and store it again with new contextual cues. That’s why our memories are not very accurate. Depending on the language used, our knowledge at the time or recall, and new interpretations, the facts of our memories can change. Most treatments for trauma to involve exposure, if not simply trying to stop avoidance. For instance EMDR.

Now I will say that it’s not fun and it’s super inconvenient to be blindsided by an unexpected trigger. It can be dangerous in certain circumstances, such as if you are driving a car or you are in a situation where you just can’t afford to have panic/traumatic symptoms.

At other times, it’s simply a memory that feels like it’s happening to you again because your brain hasn’t found a better way to store it yet, which sucks, but is not dangerous. I support letting people know that there may be sensitive content, but I don’t think that everything needs to have a trigger warning attached to it. When you think about it, trauma is so varied and the particular triggers could be anything from a type of relationship you see played out on television to a certain smell.

It’s important for people to be aware of how their content may affect other people, but people with trauma also need to be aware that they will not be able to control the triggers in the world all the time and it’s a normal part of the journey to have flashbacks and triggering events. It’s important for people to use their judgment about the type of content they consume and maybe save some types of content for a better time when they can work through the pain they feel.

As a parallel, people who have strong addictions like alcoholism also have triggers associated with memories that often cause the urge to relapse. We certainly don’t put warnings on everything that might have a beer or a drink of some kind in it.

To be clear, I don’t think that content warnings or trigger warnings are stupid. They are always welcome and thoughtful; there are just unlimited bases to cover and the exposure to triggering stimuli is not actually a dangerous thing. That does not mean that people should be blindsided to it, but its important for people to reduce the avoidance.

On Social Media and Trigger Warnings

I’ve said that I don’t think that everything needs a trigger warning and that people do need to have some exposure to recover from trauma, but that is definitely on a continuum. Repeated triggers and being unable to escape the cycle of going through flashbacks, etc. over and over can be exhausting, frightening, and frankly cost people jobs, grades on tests etc. when it interferes with life.

For instance recently there was that #MeToo campaign where people spoke up about instances of sexual assault or harassment. Obviously that can be triggering to people who have trauma that is related to one of those events, or just a huge bummer for someone who is sensitive in general.

That’s totally valid. I think that there is an appropriate balance between participating and engaging with the things that are uncomfortable and also affording yourself the mental space to not be in anguish all the time and live a successful life.

However, there are definitely some habits and techniques that you can use when things get to be too much. The most obvious one is take a social media break. Just uninstall the apps and take a step away for a week. Sometimes there is this narrative that if you are not instantly aware of everything that happens in the world at a moments notice that you are being irresponsible or uninformed. I think that’s false.

I think that social media gives a false sense of urgency to a lot of things, so don’t feel guilty about taking a step back. In fact, for things like social justice issues, spending a bit less time on social media might free you up to take more action related to the topic.

The other thing aside from stepping away completely is muting topics, which you can do on twitter. On Facebook a great strategy is when you realize there is a thread or a post that you should not dive into and that you don’t even want to see, just click the … and hide it immediately . My wife taught me that trick. If you do it as quick as you can the temptation is gone and you can move on.

Some awareness and personal responsibility is here for your own self-care as well. Understand the types of content that you are exposing yourself to and make your own judgment about whether you can emotionally afford that at the moment.

Want to submit a question for the podcast?

I'm always taking questions for the podcast, so contact me at robert@duffthepsych.com if you have something you want me to talk about.

Get in touch with Duff 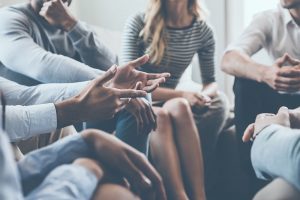 Guest Post: Working in a Psychiatric Hospital as a Person with Mental Health Issues
I have an interesting guest post for you today! Linla is in the process of getting her degree in psychology…