In episode 318, I received a question from a listener asking whether it’s normal to have interests in another person when you are married or in a relationship. In this post, I offer my thoughts on the subject!

Hi! This is a great question. I’m glad that you are asking this earnestly. I think a lot of people are afraid to ask questions like this.

The answer to the first part of your question is YES! It’s totally normal. 100% I think that depending on the society that you live in, there’s a good chance that you were raised with a lot of influences through media, school, family, maybe even religion, that place such a massive value on monogamy, fidelity, etc. Like it’s some sort of crime to be human. In my opinion, one of the primary things that make us human is our ability to have an impulse or instinct and make our own decisions about what to do with it. That’s why we have these big frontal lobes that allow us to take various inputs, run the simulation, and decide on a specific course of action. Now, that is not so say that there is one correct course of action. I’ll talk more about that. But what I’m trying to say is that it’s not so much the feelings that you have that matter as much as what you do or don’t do with them.

We are all only human

There is this sort of toxic testing that I see some people do in relationships where they ask questions to check and see if they are the only person that their partner wants. Like “babe what do you think of that person?” “Oh idk babe – you’re the only one that I want. You’re the most beautiful person in the world.” Barrffffff. Like yes you should like your partner. You should be attracted to them if that’s important to you. But that doesn’t shut down the part of your brain that feels attraction to the rest of the world. By pretending like it does, you can just ignore things that really should be processed and brought to your conscious awareness. I think this is where people fall into the whole work wife/husband thing. They have an attraction and natural connection to someone at work. So they gravitate to them and start spending all this time with them while at work. Eventually, they are starting to get into trouble because their spouse is jealous or someone thinks that the relationship is inappropriate.

Working within the boundaries of your relationship

When it comes to what to do about it, the answer is really going to depend. It can go a million directions. My wife and I are one example, but one that I don’t expect most people to be interested in replicating. We are in an ethically nonmonogamous relationship, meaning we are allowed to have romantic or sexual relationships with other people. This could be something committed, but it doesn’t have to be. There are many forms of nonmonogamy and this is what works for us. So in OUR case, what we do about being interested in another person is basically consider if they are someone that we might want to pursue something with and if that would be a good idea. Doesn’t mean we are trying to get with every single person we see, but the option is there if we’d like to explore it. That is all good within our particular relationship agreement. Cheating is still possible in non-monogamy. That would essentially be anything that is outside of your relationship agreement and boundaries. Even before we agreed to be nonmonogamous, we were generally open about attractions and such. It was not an option to pursue a relationship with someone else, but we understood that it’s not a crime to be attracted to someone else. You can’t help it. There are still expectations for what is considered appropriate behavior, but the feelings themselves just are.

In some cases, the answer to what to do about having feelings for someone outside of your marriage is nothing. If it’s a private thought and attraction and you would not ever DO something about it, then there’s nothing to be done. Journal about it. Fantasize if you want. Acknowledge it to yourself and let it be. You don’t need to confess, apologize, or feel bad for something you didn’t do. Even if you had a daydream about what life would be like with another person or masturbated while fantasizing about them, you didn’t actually do something to violate your relationship agreement. Those are just the private thoughts in your head that you have a right to have. My response here does not factor in religion or culture that might have specific opinions about your private thoughts, so just keep that in mind.

If you think that you are interested in another person in a way that is going to be disruptive to your marriage, you may need to address it. I have certainly had people come into therapy and let me know that they are worried about making poor choices with someone outside of their marriage and want support/help working with that, so talking with someone and having accountability can be helpful. There may also be reasons related to your own marriage that you are struggling with the feelings you have for someone else. For instance, if you are quite unsatisfied with your relationship or you are being treated poorly, the grass may look quite a bit greener on the other side and that is super valid. With that you also have options. You can work on the relationship through your own efforts to communicate or through therapy, a relationship coach, or someone within your culture or religion that can help.

If that’s not something you desire, then the question becomes should you work toward leaving? If that were the case, you need to be careful about wearing rose-colored glasses when it comes to this other person. These should be two different things. The attraction to this other person COULD but does not have to be an indicator that there’s something amiss in your relationship. That doesn’t mean that you should leave for that person. You may be seeing that other person through a very naïve lens, since you haven’t lived with them etc.

So lots to think about there. A simple, but super interesting question thank you.

You can listen to this on Episode 318 of the podcast! 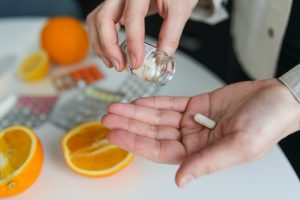 Episode 319: Medical Clearance for Job & Exposure for Medication Phobia
Hello, friends. In this episode, I answer questions on the worry about losing your high-pressure job if you seek help…