My Husband Cheated On Me, How Can I Heal and Save My Relationship?

In episode 295, I received a question from an individual who is finding it incredibly hard to heal after their husband cheated on them, despite still loving him and wanting to continue their relationship. In this post, I dive into this complex issue in more depth and offer my thoughts on how to move forward.

Hello, I wanted to start off by saying I love the podcast, it gives me a lot of insight even when I can’t always relate to the questions that are asked.

I had a question about healing relationships where there’s been cheating. I love my husband so much and I don’t want to leave him. But he cheated on me and I just feel so mad at him and like I don’t care about his feelings anymore. As far as I know, he didn’t cheat physically but was asking girls for sexual pictures and giving them attention online.

This was especially hurtful because it was around the same time I had miscarried. Also, he had quit his job to start his own and I had been supporting our family, in some of the messages I saw between him and other women, he was offering to pay for their salon trips, or asking to go to the gym with them, meanwhile I was struggling financially and could’ve totally used a trip to the salon, and I had asked him so many times to join me at the gym.

I love him so much but I have suggested divorce, he doesn’t want that. But when we’re together I’m just always so so angry with him. Do you have any advice on how we can heal this? He is doing therapy on his own, as am I, however he declined wanting to try couples counseling because “he is scared”.

Wow. This is some big stuff. I’m sorry that you’ve had to go through this. First off, your feelings are totally justified. He was doing something that he clearly thought was outside of your relationship agreement, since he was hiding it. That in itself could be something that’s not the hardest thing in the world to work through. We all have interests and needs and desires. Sometimes rather than communicating them, we just make poor decisions and then lie to cover them up. BUT – the other stuff you’ve mentioned makes it even harder to move past.

The fact that he was offering your limited resources to other people during a time when you were emotionally vulnerable and supporting his ambitions is just pretty f**king disrespectful. Asking for pictures and having emotional or sexual interactions with people online could be just a dumb impulse control issue or a way to cope with the stress of that clearly stressful period of time. But these other things are a good reason to question your husband’s character. Even if you were say in an open relationship, it would not be fair for him to be depriving you of the things that would make you happy while using the resources you earned to give them to someone else. Basically what I’m trying to say is that he f**ked up. In a situation like this, there is a reasonable power imbalance that happens. He f**ked up and he is the one that needs to start making some concessions to rectify the situation. He doesn’t get to just coast and wait for time to smooth everything over.

You said he doesn’t want a divorce. I’m sure he doesn’t. But there are two of you here. That’s not really his choice. You said he is scared of couples therapy. Too bad! He doesn’t get to literally do nothing to rectify the situation. That’s just a larger version of invalidating your feelings. Essentially communicating to you that it’s not that big of a deal and you should just get over it. Nahhhhh. He needs to make an effort here. There are books to read, therapy to be done, conversations to be had. But if he is just going to avoid all of them, there really isn’t any change that you can hope for.

Now on your end, I think it’s totally valid that you are angry with him. Why wouldn’t you be? He violated your trust and has barely done anything to make up for it or compensate for it. If you felt like he understood why it was uniquely painful for you, that he was remorseful about it, and had a plan to do better in the future, you might be less resentful and angry. But it doesn’t sound like that’s the case. So, it may be time for you to draw a bit of a line in the sand. You might need to tell him what your expectations are. That he needs to participate in therapy with you or you guys need to both read through a book about recovering from an affair and talk about it each week. Whatever the strategy is, you need to see an effort on his part to recognize the pain he caused you, to be accountable, and to work to rectify it.

Now, let’s say he does that. Then you also have a job. You can’t stop yourself from feeling resentful or upset. That’s just how feelings work. But if you are agreeing to give him a chance, you need to give him a chance. You can feel lingering feelings, but if he is operating within the bounds of your relationship agreement and following through with the commitments that he has made to you in regards to recovering from these ruptures in the relationship, you don’t get to treat him poorly. You can be honest about your feelings with him and also recognize the fact that he isn’t doing anything else wrong. It’s just going to take time. I would also advise you to seek the counsel of other people that you trust in your life. Friends, family, etc. If you have your own therapist, talk to them as well.

I don’t know this guy and I only have a limited view on the situation based on what you wrote here, but there are a lot of red flags that would start to make me wonder about this guy taking advantage of you. Your emotional labor, your money, your attention, and your stability. Given those, he gets to f**k around by starting a business, which is always a risk, get attention from other people online, and everything else that you’ve been through. Sorry if this wasn’t a very uplifting answer to your question, but I just want to be real with you. It is absolutely possible to move through something like this and have a successful marriage. No question. But I’m not sure whether this is the extent of it. I don’t want you to be taken advantage of. He needs to commit, take action, and prove himself here. Otherwise, he doesn’t deserve you.

You can listen to this on Episode 295 of the podcast!

Anger After Suicide: How to begin healing your emotions

Overcoming Sexual Abuse: How can I improve intimacy in my relationship?

How Do I Set Healthy Boundaries With People?

Bipolar in College: Returning To School With Confidence 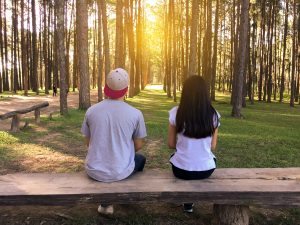 Will I Ever Be Able To Have A Relationship Again?
Learning to trust again after a significant history of abuse is never going to be easy, but there can be…