Are you and your partner compatible? In episode 311, I received a question from a listener concerned that their partner’s lack of compromise and differing love language suggests they are not compatible in love. In this post, I talk about love languages and provide some thoughts on things to consider within your relationship.

I have someone I love. I’ve been with them for over 4 years. His love language is acts of service. Mine is words of affirmation. He has told me recently he can’t give me words of affirmation. Is this a deal breaker? The logical part of my brain says if you love someone and want to make it work, then you compromise. You meet in the middle. You attempt to meet their needs. The logical part of my brain says if I were the right person then he would try to speak to me in my language and I would try to speak to him in his language.

Thanks for the question! For those who are not aware, love languages are ways of expressing love and care for others that have been proposed by Gary Chapman in the 90s. There are five general love languages, and it’s important to keep in mind that these are not official in any way. They are from Gary’s experience as a counselor etc. Obviously the categories resonate deeply with a lot of people and the terminology has become part of modern language, but they aren’t based on some sort of scientific literature or established personality dimension etc. The love languages he describes are: words of affirmation, quality time, receiving gifts, acts of service and physical touch.

They are fairly self-explanatory, I think. Basically do compliments and reassurance mean the most to you in a relationship? Does spending one-on-one time with the person? Do gestures in the form of gifts? These can be small things like flowers or a coffee to big things jewelry etc. Acts of service would be trying to anticipate the other’s needs. For example, setting up someone’s pill box for them when they have a hard time remembering etc. And of course physical touch. I think that one piece of dialogue that tends to be missing when it comes to love languages is not only what someone enjoys receiving, but also what they are best at and enjoy giving. For example, I naturally tend to give my partners acts of service. From filling up a water cup before bedtime to researching a topic for someone to cleaning. It’s just how I operate. For me, that isn’t really the most important thing to receive. I would be much more fulfilled by receiving quality time, physical touch, and words of affirmation in response. Again, these things are not neat and tidy categories that everyone has to fit into – they are just a shorthand way of understanding how someone operates within a relationship. They may shift and change over time as well.

So with all of that said, I’m really confused by this question. How are you with someone for over four years and in love with them if they can’t provide for your primary love language? Have things always been this way or has he changed in some way after these first few years? If he’s always been this way and you’ve continued to be together, I’d have some questions about your upbringing and your relationship history. Are you used to putting other peoples’ needs first and burying your own needs in order to make things work? If he literally is saying, “I can’t give you words of affirmation,” that’s a pretty broad statement that just makes the guy sound like an asshole.

Now, if he’s saying that he is trying to give you the affirmation you need, but he is falling short and doesn’t feel like he is capable of being what you need, that’s a totally different story. There is a BIG difference between saying no words of affirmation and recognizing that it’s just not your strong suit. I wonder as well whether you two have the same definition of words of affirmation. Have you actually talked about what your needs are without using the buzz words of love languages? I’m not assuming anything about the way you have communicated about this stuff, but it would be a shame for this sort of discord to be build on a misunderstanding of terminology or something like that. In a healthy relationship, you shouldn’t be required to become a different person entirely, but you should at least consider your partner. Imagine if you and your partner liked different music and you simply refused to let them play the music they like in the car or house? That would be a really shitty thing to do. Just off the cuff, this sounds less like he doesn’t understand your love language and more like he just isn’t willing to put in the effort. I could certainly be wrong here, but that’s the vibe I’m getting.

It sounds like you guys have a lot of room for improvement in the communication department. That is probably the most common cause of issues in a romantic relationship. If things are not being discussed openly and plainly, then there is so much room for interpretation, which can get you both into trouble. Does he have an accurate understanding of what would make a difference for you? Of what sorts of statements and interactions you would like? He doesn’t have to be a natural, he just has to make an effort and translate it into his own version. Same applies to you. There is not single thing that is a deal breaker in a relationship. What it comes down to is whether you are happy or not. Is this what you want? If not, can it be improved? These are the more important things to consider rather than just determining what individual thing is a deal breaker. I would encourage you to engage with your support. Talk to people you trust. And talk to him. Keep talking about it until you feel like you have come to a good conclusion about whether things are going to work or not.

I understand your concern here. In the way you presented it, I’d be concerned too. So, honor that concern and do some work to clarify where you stand.

You can listen to this on Episode 311 of the podcast! 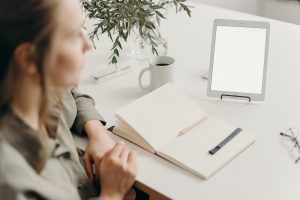 How To Overcome Procrastination
In episode 311, I answered a question that focused on procrastination and asked for advice on getting started with tasks…