In episode 255, I received a super interesting question from an individual asking whether the herbal remedy St. John’s Wort can help with depression. In this post, I dive into the subject and take a look at whether it is an effective antidepressant.

Hello, thank you so much for all the things you do! Sorry if this is inconvenient, but I don’t have access to a therapist in my area so I thought I might ask you. Like I said I can’t consult a professional and so it’s hard to get antidepressants here. However, I read that St. John’s Wort can help with mild depression. I was wondering if you’ve read any research about it or if you’ve suggested it to one of your clients before? Thank you.

Great question! Not sure if I have covered this one before, so glad to be able to discuss this topic. As always, big caveat that I am not a medical doctor and I’m not suggesting you go out and start taking anything without speaking to your doctor. Even for supplements or folk remedies, it can be really important to talk with your doctor so that you aren’t going to run into trouble. For St. John’s wort in particular, there are several known interactions that you will want to look out for. If you hear that a medication is not to be combined with MAO inhibitors, then you will likely want to steer clear of adding in St. John’s wort.]

What is St. Johns Wort?

So let’s back up a bit. What is St. John’s wort? St. John’s wort is a naturally occurring plant. You can find many pictures of it online. It’s a pretty yellow flowering plant. It has been used for centuries as a medicine, possibly as far back as ancient Greeks. In the past, it has likely been used for way too many ailments that it actually doesn’t treat.

What we do know now is that St. John’s wort can be used an effective antidepressant. There have been a number of clinical trials conducted that show it is better than placebo and similarly effective to standard SSRIs for treating mild to moderate depression. There are a number of ways to take the substance, but most often it is in pill form. In the US, it is considered a dietary supplement and is not regulated as a drug. Therefore, you can get a bottle of pills for less than 10 bucks on Amazon and have it delivered to your door the next day. Pretty crazy when you consider how much regulation there is over things that are way less impactful or risky in the US, but I digress.

How does St. Johns Wort work?

Like SSRI medications, St. John’s wort takes a while to become fully active, but there are some other ways of using it. One day in a little bit of desperation, we realized that smoking the dried herb really helped to curb the symptoms of withdrawal when my wife ran out of her medication. This is likely due to the fact that she already had the long-term brain chemistry change and this was more like replacing a missed dose. In order to have a lasting impact, you’d need to continue using the substance over time. Again, I am not telling you to do this. Please be careful.

It seems that St. John’s wort does its magic through a few different mechanisms of action. First off, similar to SSRIs, it inhibits the reuptake of serotonin, meaning that serotonin lingers in your brain and has more of a chance to latch on and have a positive effect. It also does this for dopamine and norepinephrine. At the same time, it binds to GABA receptors, which are inhibitory chemicals. So it stops them from binding and causing a depressant effect.

It’s pretty fascinating how many substances naturally exist out there that we have either stopped using as medicine or regulated and outlawed. For instance, psilocybin from “magic mushrooms” is being shown in the research to have a significant anti-anxiety effect and there is some evidence that it could assist in recovery from things like brain injury. All of this is to say that St. John’s wort could be an option for you if you have mild-moderate depression and you are not taking other medications or supplements that would interact with it. For this, you will probably need to talk to your doctor.

Other things to consider

I’m not sure where you live, but aside from St. John’s wort, you also may want to look into telehealth. These days, MANY providers are working with people online. There are services like Betterhelp, which can give you access to licensed professionals for lower cost than traditional therapy as well. Increasingly, telehealth platforms are starting to integrate psychiatry as well and there are a number of ways to get access to mental health medications like SSRIs online too. Before you rule anything out, make sure you do your due diligence and look into what options you might be able to access from the comfort of your own home.

Beyond treatment, there are also many other resources that you can start diving into as well. Books, podcasts, online courses, youtube videos, blogs, etc. You aren’t stuck or hopeless. Lot’s of things to consider and look into. In a vacuum, let’s assume that you are in a remote area with no access to mental health care and you are not taking anything that would be contraindicated… if your body allows for it, cardiovascular exercise is technically free and has been shown in the research to be about as effective as an SSRI for depression. You also may consider St. John’s wort, which is similarly about as effective as an SSRI for mild to moderate depression and is pretty damn cheap.

Ideally, you are going to want to find a way to talk to a mental health and medical professional about this stuff, but even if you had ZERO way of doing so, those are two options that can make a big difference.

Thank you for the question!

You can listen to this on Episode 255 of the podcast! 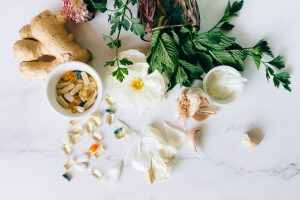 Episode 255: St. John’s Wort for Depression & Sleep Anxiety After Flu
Hello, friends. This is a great Q&A where I take a look at two interesting questions relating to the use…