Divorce And Mental Health: How Can I Move Forward?

The end of a relationship is often never easy, but when it’s completely unexpected it can leave you feeling lost. In episode 301, I received a question from a listener whose husband decided out of the blue that they wanted a divorce, despite having said he was the happiest he’s ever been. In this post, I dive deeper into the factors at play in this situation, including the contribution of mental health issues, and offer my thoughts on moving forward.

My soon to be ex husband has a family history of mental illness and many suicides. He struggled with it as well off and on

A few months ago he had an out of body experience dream and out of the blue he decided he wanted a divorce. The week prior he said he was the happiest he’s ever been and he was very happy with our marriage. There was a complete change. He wouldn’t do couples therapy because he said it has nothing to do with our marriage, but more of his mental illness. He said his mental health was changing me and he couldn’t live with himself if he stayed because he couldn’t give me the life I deserved.

How do I move on from a great 12 year marriage? I don’t feel like I can accept his reasoning.

Thank you for the question. I imagine this has been a bit of a whirlwind for you. I’m sorry that you’re going through this. I’m going to assume that you’re being truthful with me and with yourself that this has come out of left field for you. The alternate possibility is that you have been really not seeing the deterioration of the relationship or the pain he has been in or you have been in denial and this is basically his ejector button. If we are not assuming that, this is very concerning and it sounds like there could be serious mental health implications for him.

The possibility of mental illness

It’s hard to determine exactly what could be going on, but I would definitely have questions about something like bipolar being part of the mix. Someone who is in a manic phase might make impulsive decisions and have sudden “realizations” about their life. For example, I have worked with people who decided to up and leave their family in the middle of the night to pursue a relationship with someone that actually wasn’t interested in them and that they haven’t talked to in a long time. I have had someone have the sudden realization that they are in the wrong career and go drive up north to start a weed farm. Not everyone who has mania is that extreme, but that would be one potential explanation for the extreme change in behavior that you are seeing.

Now, typically the onset of mania isn’t so abrupt. There is usually a bit of a lead up period. For instance, you might see decreased sleep and more agitation. You might catch little things that help you see something is amiss. Of course, it’s possible that these signs flew under the radar until now. It might be helpful to review the symptoms of bipolar and look at the course of your relationship together to see if this could have been a factor throughout that just was never this severe. Common symptoms of mania include decreased need for sleep, pressured speech, flight of ideas, impulsive or poor decision making, increased risk-taking behavior, and increased agitation.

Another thing to consider is whether there have been any physiological changes that have occurred. Things like medication side effects or interactions, bodily infections, or neurological issues can cause someone’s behavior to drastically change. This is a tough situation because you aren’t a doctor and you can’t exactly convince him of anything. He’s going to have to make his own decisions. But if you feel like you truly have had a great marriage and your gut tells you that this is representative of something happening to him like an illness that is causing him to behave differently, you could totally push to pursue that aspect. The best course would be to empathize with him and validate his feelings, but also ask that he go to the doctor because you are concerned about him. Have him get evaluated to rule out some of these things.

Other aspects to take note of

Also ask yourself, does he seem to be off in other ways? Is his behavior different in other facets of life or is it exclusively tied to the relationship? Are there any substances involved? Is there anyone else that you could talk to about this? Friends of his or family members? The reason I ask is to see if there are things that he has been talking with them about over time that you were simply not privy to. You could let them know what happened and ask if that makes sense to them. If it doesn’t and they are just as concerned as you are, you might pull them into the fold and get them to urge him to look into evaluation and getting some help as well, since it may impact him differently to hear it from people that he trusts that are external to the relationship.

A divorce is also a whole process. It’s not like you can snap your fingers and be divorced. There are legal proceedings involved. Perhaps it would be helpful to meet with a divorce attorney or similar professional together to talk about it. Maybe a break or change in the relationship is called for rather than going straight for the divorce. Like what would happen if you took some time apart to make sure that this is what he really wants. Basically give time for some mental health episode to settle a bit if that is a factor. You also don’t have to be a pushover about all of this. You can be more firm if that’s something you haven’t done. You can say that you disagree and that it’s not fair for him to make decisions on your behalf about the impact that his mental health has on you. That’s your choice not his. If he is not happy and wants to leave that’s a different story, but he doesn’t get to make that decision for you.

All in all, I would advise you to really think things over, gather information, and make sure that this isn’t just a legitimate boiling point in your relationship. If not, I would encourage you to stay strong and push for help. Push for him to get checked out, push for you guys to do therapy, maybe even see if he has any family he can stay with for a little while.

I hope things are already getting better, but if not, I hope that these thoughts can help you move things in the right direction.

You can listen to this on Episode 301 of the podcast! 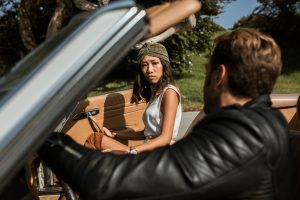