When Should You Take Suicidality Seriously?

Suicide is a topic that many people feel uncomfortable discussing. In episode 271, I received a question from an individual asking when they should take their own suicidality seriously, wanting to talk to their friends and family, but concerned they won’t be taken seriously. In this post, I go into more detail and offer my thoughts on addressing the topic with your loved ones.

I know this question may sound dumb, but how do I know when to take my own suicidality seriously? I have thoughts about suicide daily, but I don’t know if that’s the same as suicidal thoughts; like, I think about dying, how I would do it, what would happen if my attempt failed, what would happen if my attempt didn’t fail, stuff like that. But I don’t have a plan and I haven’t attempted, although the closest I have come to going through with it is having the pills in my hand.

I kind of want to say something to someone, but I don’t know how serious they’ll take it or if it even is serious. Because my family knows about my depression, but I’ve never attempted before so maybe they’ll just think I’m being dramatic? Or maybe I am being dramatic just sending this. Plus I joke about it with friends and family, saying things about killing myself and who I’m leaving my stuff to when I die, things like that, so I feel like I have no right to talk about it seriously now.

Also (last thing, I promise) I’m a grad student so I can’t afford to get a 5150 so basically what I’m trying to ask is how do I navigate all this?

Oh man this question does not sound dumb AT ALL. I think it’s a super valid question. Probably one that many people have had. What I love about this question is that you recognize that suicidality isn’t just one thing. There are SO many different experiences from active suicidality where you are trying to figure out how to end your life to passive ideology where you think about it and would not really like to live anymore, but also won’t do anything about it, to intrusive thoughts that scare the crap out of you and you don’t want to die. In any of these cases, I think it is important for you to take your thoughts of suicide seriously. Whether they require an intervention of some kind is a different story, but your experience is valid and should be taken seriously.

So to anyone listening who exists somewhere on the spectrum of suicidality, I do want you to take your experience seriously. That doesn’t mean you need to upend your life, but you don’t need to minimize your experience either.  If you feel like you could serve to learn more about suicide either for yourself or for someone else, I have a chapter in my book, F**K Depression that is available for free at duffthepsych.com/suicide. There’s even a video of me reading it out loud to you. I would suggest that you check it out as a starting place for vocabulary surrounding suicide, different levels, etc.

For you, in particular, I would say that your suicidality is at a level that is concerning. I feel like you could easily stay at this level and cruise under the radar for quite a while, but I also feel like it would only take one serious event to make you go from holding the pills in your hand to actually taking them. I don’t want to play with fire like that. You asked if you are being dramatic in sending this. The answer is no. You are sending this for a reason. Because you know that you will probably make it, but you are also aware that you aren’t too far from not making it. The fact that that is concerning to you is a good sign, but we shouldn’t ignore this.

Embarrassment, convenience, and other daily life things like that are truly not relevant when it comes to the topic of suicide. If you end your life, you will cease to exist forever. That’s vastly different than feeling like you’ve “cried wolf” or made light of the issue. Don’t let the immediate discomfort cause you to avoid a topic that might remove any choice about your future that you have. Even having one person in your life who knows about this makes such a huge difference. I have talked about this on the show before, but for so many issues in life, simply sharing the absolute truth with someone can be such a protective factor. On the flip side, dealing with this in isolation is how it becomes dangerous. I have worked with some people that ended up dying by suicide and I have worked with MANY people that lost family and friends to suicide. Someone I work with right now recently lost a sibling to suicide and they told me that overwhelmingly, they just wish that they had known. They wish their sibling said something. They also said that they wished the eulogizing that happened at their celebration of life had happened before they ended their life.

Now, I do totally understand the fear about being 5150d or having other drastic consequences because of this. That’s valid. If you are actively suicidal and in danger, then that might need to be what happens. But it doesn’t HAVE to be that. That’s one of the reasons I’d suggest that chapter I was talking about from my book. When speaking to anyone about this subject, I’d advise you to just be as clear as possible. Let them know that you are not actively planning on taking your life and that this isn’t a new issue for you. That you have had thoughts about taking your life for a long time, but that you have no active plan to do so right now. That you want someone to know so that you can feel more protected. You can reassure them that you would let them know if it progressed further than it has. This doesn’t have to start as a professional. It can be a trusted friend. Starting the process of talking about it can give you practice and can help to take some of its power away.

Talk to a professional

That said… are you talking to a professional? I think you should be seeing a therapist if you aren’t right now. If you are depressed and suicidal, it can’t be easy to be making it through life as a student. You need someone that you can talk to about this. It doesn’t sound to me like your thoughts of suicide are the intrusive out-of-place type. It sounds like you are depressed to the point of being ambivalent about your life and at times wishing you could just not try anymore. That’s not a normal, sustainable level of depression. That’s a clinical level of depression that deserves attention.

Your relationship to the world can absolutely improve. I’m not going to give a blanket statement saying “it gets better”, but it can. It absolutely can. And at your age and position in life, you have probably barely scratched the surface of what can be done about your depression and suicidality. There are so many options out there.

So, I think you wrote this question for a reason and I’m giving you permission to reach out. You might start with a trusted loved one and go from there. I think you absolutely should be getting professional help. You are young. You have a lot of time to figure things out, but you need to make it there. When it comes to talking to a professional about these issues, again just be as clear as possible. Be HONEST. Don’t manage their impressions. Give them the information that they need to help you. If it’s honest and true that you are not at risk, let them know. A common question that I ask people is on a scale of 1-10 how safe do you feel with yourself? You might ask yourself the same question. A follow-up question is typically, “Why not lower?” that can help to reveal some of the protective factors that you have.

In the end, if you need to be hospitalized at some point because you are in danger, then that’s what needs to happen. Is it inconvenient? Absolutely. Are there some variable experiences with mental hospitals? Absolutely. It is better than you exiting this world and having no chance to show the world how awesome you can be? Absof**kinglutely.

I really appreciate your trust in asking me this question. I hope I’ve given you some reassurance and direction. I believe in you.

You can listen to this on Episode 271 of the podcast! 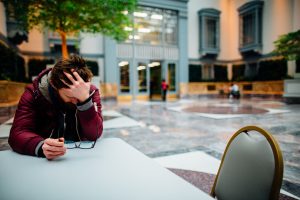 Episode 271: When to Take Suicidality Seriously & Scared of Losing Dream Job
Hello, friends. In this episode, I take a look at two questions from listeners of the podcast. The first relates…