Can you regain memories of a traumatic accident you can’t recall?

In episode 301, I received a question from a listener whose Mom had been in a serious car accident that she can’t recall, concerned whether she could gain memory of the accident if presented with enough triggers. In this post, I talk about the prospect of regaining memory after such an event and what you can do should this arise.

A few weeks ago (3.5) my mother was involved in a very serious car accident. She was not expected to live, and suffered a very serious brain bleed. She spent days in the ICU, and weeks in inpatient rehab and is now staying with me while she recovers.  We’re very lucky because she’s made miraculous progress to the point where she can walk and talk and is almost her normal self.

She doesn’t remember her accident and she was not the one driving. She has mentioned to me that at times she gets a “weird feeling” from certain triggers such as hearing cars pass on the Highway outback of our house. Of course it’s expected to be triggered after a major trauma. She keeps saying she’s terrified that the memory of the accident will come back to her and she will remember. She’s very afraid that this is going to happen.

Is it possible for her to remember the accident if she doesn’t now? We have our theories that she may have been asleep at the time as it was late at night and there was a lot of alcohol involved. I’m just curious if she could gain memory of the accident if presented with enough triggers. If so, do you have any advice on how I could prepare her for that?

Thank you for taking the time to read this!

That’s terrible what happened to your mom. I’m sorry to hear about this. However, amazing that she’s made such an incredible recovery. It’s truly wild what the body can recover from. In my line of work, I see both ends of the spectrum from people that are not able to recover at all to people that make miraculous recoveries like you’re describing. She must be a very strong person.

In this case, the prospect of her regaining the memory of the incident is highly unlikely. She would however be susceptible to false memories of the event. In car accidents with serious physical trauma, especially trauma to the brain, amnesia is common. In this case, your mom would absolutely be expected to have amnesia given that she suffered a brain bleed. There are two types of amnesia that often happen with car accidents. One is called retrograde amnesia, which is when you can’t remember events that happened before the event that caused amnesia. The other is called anterograde, which is when you can’t recall things that have happened after the event. Often, you have some of both. A very common scenario is for people to have a very fuzzy recollection of the day they had their accident. Then when it comes to the actual accident, they don’t remember anything. They might have patchy images of being pulled from the car, being transported to the hospital etc. After that, while they are in the hospital, their memory may be pretty shotty as well. It is often the case that they only have solid memories of what happened several days or weeks later. In this way, you get a little bit of both retrograde and anterograde amnesia.

Now, I mentioned false memories. All humans are susceptible to false memories. There has been a lot of research about this. I have absolutely had them in the past, such as my memory of a big earthquake that I wasn’t even present in the house for. There has also been research specifically focused on people’s recollection of car wrecks. I used the word wreck intentionally – in that research, which I’ve talked about on the show before, people were asked to watch a motor vehicle collision and then asked to rate different aspects of it like how much damage there was etc. Depending on the language used such as collision, wreck, accident, etc. the rating was different. So I very often have people that come into my office and tell me a whole story about the event and then I find out that they don’t actually have any memory of it and their memory is constructed from bits and pieces that doctors, EMTs, law enforcement, and family told them. In some cases, they realize that they don’t know what happened and in others, they hold that this is the truth until they are corrected by their family.

When someone has amnesia like this, they are very unlikely to recall the event. You can talk to her about the fact that she will probably piece together bits and pieces about what she has heard, but that her brain was damaged and never made a memory of the event itself. I think the issue that we are really dealing with here is trauma. She’s having trauma triggers, which is understandable. I was hit by a car on a bike once and for quite a while, the smell of burning rubber made my body go into a minor fight or flight state simply because the sensory information of the event was stored along with the trauma. Even though the episodic memory of what happened is not there, her body may still hold the score as they say. So those triggers are legitimate symptoms of trauma. But they should fade over time. And if not, she should get treatment for them. PTSD and other traumatic reactions are treatable.

The thing that maintains them most is avoidance. And we can see that happening with her already. She is so scared of potentially remembering the event that she is already preoccupied and trying to avoid the thought. This is reasonable, but not helpful. Avoidance makes that traumatic memory lock in further. When I think about it in this way, maybe now is the time to get her set up with some trauma therapy. They can help her approach these sensations and pieces of memories in a way that is gradual and constructive rather than throwing her off the deep end. They can also teach her strategies to deal with the bodily sensations that come along with the trauma, so she doesn’t have to be so afraid of accidentally running into a trigger out in the wild. If she isn’t willing to get help from a therapist, you could direct her to resources that explain how trauma works and how anterograde amnesia from accidents works. I’m sure there are tons of great youtube videos and bite-sized articles that could give her an idea about it.

But overall, don’t let her anxiety become your own. It’s been a relatively short amount of time since the event. She’s made a fantastic recovery and should be celebrated for that. Things may resolve on their own, but there is absolutely nothing wrong with making sure she has the tools she needs sooner rather than later.

You can listen to this on Episode 301 of the podcast!

How Can I Support My Autistic Partner’s Mental Health Without Harming My Own? 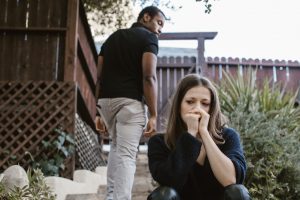 Divorce And Mental Health: How Can I Move Forward?
The end of a relationship is often never easy, but when it's completely unexpected it can leave you feeling lost.…